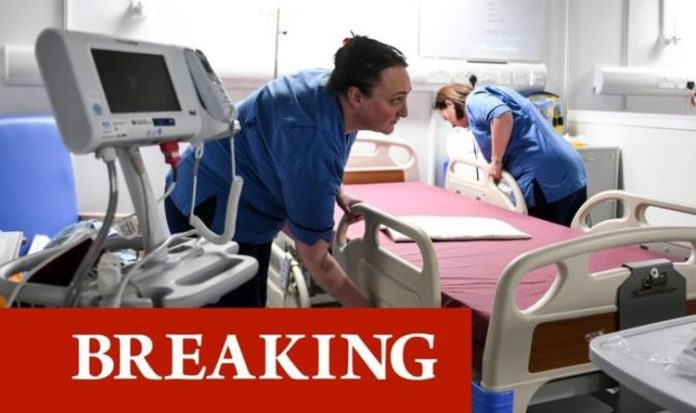 The figure recorded in the week ending November 6 marked the highest since the week ending May 22, according to data from the Office for National Statistics (ONS).  The weekly figure also marked a jump up from 1,379 deaths in the week to October 30 – an increase of 40 percent. This marked the first time since June that weekly COVID deaths surpassed 1,000.

The latest figure released by the ONS – for the first week in November – means the number of coronavirus deaths recorded in England and Wales stands at 59,473.

The five-month-high came after Wales ordered a 17-day “firebreak” lockdown in a bid to bring down the infection rate while millions across England were also placed under a second national shutdown.

Registered deaths with COVID-19 mentioned on the death certificate increased week-on-week in every region of England in the week to November 6.

According to ONS statistics, the north-west if England recorded 568 deaths – the highest figure for the region since the week ending May 15.

In Yorkshire and the Humber, 329 virus deaths were registered in the week to November 6: again, the highest for the region since the week to May 15.

And in north-east England, 152 coronavirus fatalities were recorded, marking the highest since the week to May 22.

The release of the ONS data comes as new figures from the UK’s statistics agencies showed more than 68,000 deaths involving COVID-19 have occurred in the UK.

A total of 65,546 deaths have so far been registered in the UK where coronavirus was mentioned on the death certificate.

Since these statistics were compiled, a further 2,228 deaths are known to have occurred in England, plus 106 in Scotland, 143 in Wales and 90 in Northern Ireland, according to additional data published on the Government’s coronavirus dashboard.

Together, these totals mean that so far 68,113 deaths involving COVID-19 have taken place in the UK.

Boris Johnson has said four weeks of national shutdown should be enough to drive down England’s infection rate.

Next week the Government will decide how to end the lockdown as scientists warned a tougher tier system is needed until vaccines can drive back the pandemic.

Communities Secretary Robert Jenrick said on Tuesday that ministers want to see a “significant easing” of coronavirus controls when the lockdown in England expires on December 2.

He floated the idea of imposing a set of stricter controls on top of Tier 3.

Mr Jenrick said a parliamentary vote would be needed for any extension of the nationwide lockdown.

He told Sky News: “It is our hope and expectation that that won’t be the case and that people in England will be able to move back into the tiered system.

“There will be a review. That work is undergoing on what those tiers look like and how local areas go back in but that will very much depend on the data.

“We will have to make decisions nearer the end of the month once we have got the most up-to-date information possible.

“But we all want to see a significant easing of the measures in all parts of England at the beginning of next month.”