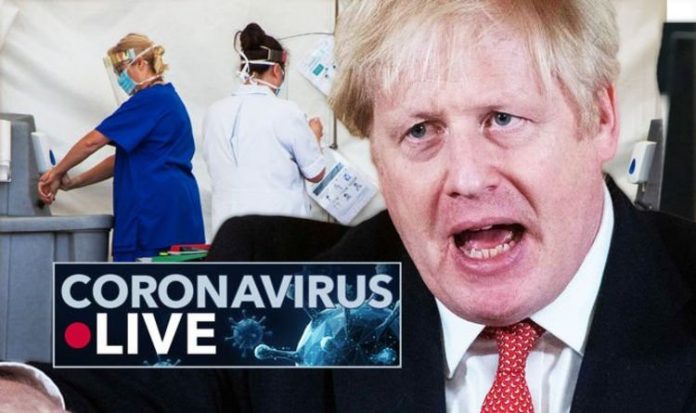 Health Secretary Matt Hancock announced the huge boost in national testing on an “unprecedented scale” in a bid to fight the invisible killer disease. The Office for National Statistics (ONS) said it will “prioritise ramping up in the north west of England and London” amid spike in COVID-19 cases these areas.

The survey ultimately aims to increase towards 400,000 individuals, the Department of Health and Social Care said.

The expansion will see 150,000 people tested per fortnight by October and the survey will be extended to cover Scotland, Wales and Northern Ireland.

Mr Hancock said: “We are developing the capacity to test for coronavirus on an unprecedented scale and undertaking one of the biggest expansions of surveillance testing we have ever seen.

“This ONS survey will be a crucial part of this work – improving our understanding of the rate of infection in the population and how many people have antibodies.

“This will allow us to further narrow down the areas potentially affected by local outbreaks and continue our fight to curb the spread ahead of winter.

“The data and insight gathered will help inform our national, regional and local responses to the pandemic, allowing this nation to get back to the things we love doing.”

7.30am update: Local lockdown would be ‘catastrophic’

Oldham council leader Sean Fielding has warned that a local lockdown in the town would be “really catastrophic” as he urged ministers not to impose one.

The Labour councillor told BBC Radio 4’s Today programme that the “raw numbers” may suggest the town is similar to Leicester at the point it was put into local lockdown.

He said: “However we’re strongly making the case up here in Oldham that would not be the right solution for the wave of the pandemic that we’re seeing in Oldham,” he said.

Mr Fielding argued “household transmission” is driving infections in Oldham, most cases are among the working age population and there is little increase in hospital admissions or deaths.

The head of Germany’s vaccines regulator said people could be vaccinated early next year against the coronavirus that has killed almost 800,000 worldwide and wreaked havoc on the global economy.

More than half a dozen drugmakers around the world are conducting advanced clinical trials, each with tens of thousands of participants, and several expect to know if their COVID-19 vaccines work and are safe by the end of this year.

Klaus Cichutek, head of the Paul Ehrlich Institut, told the Funke group of newspapers that data from Phase I and Phase II trials showed some vaccines triggered an immune response against the coronavirus.

He said: “If data from Phase III trials shows the vaccines are effective and safe, the first vaccines could be approved at the beginning of the year, possibly with conditions attached.”