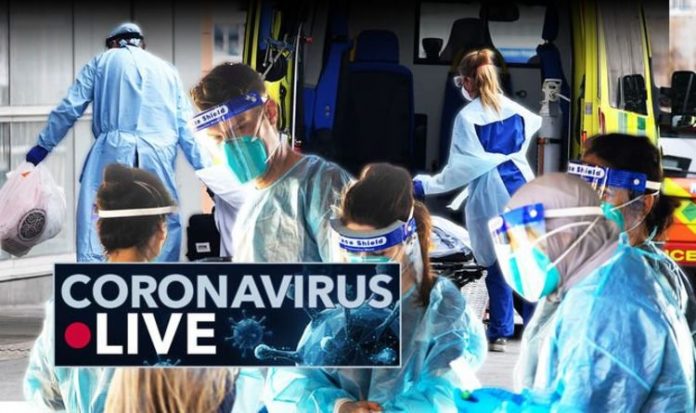 An internal NHS memo has warned doctors not to give Remdesivir to patients “receiving ongoing mechanical ventilation”. Prescriptions should also be kept to five days because of a “supply disruption”. The only people that will be given the drug are those with the early stages of the virus. A Department of Health spokesman said: “We are aware of a rise in the use of Remdesivir in line with an increase in COVID-19 hospital cases.

“While there remain plenty of Remdesivir supplies, we have asked the NHS to temporarily prioritise patients to ensure those most likely to benefit can access it.”

The department added patients with coronavirus were receiving other drugs.

These included “dexamethasone or hydrocortisone which have been proved to save lives”.

There are currently more than 200 vaccines being developed across the world, with more than 40 of these in clinical trials.

10.12am update: Could Joe Biden be at risk of covid after Trump tests positive

The presidential hopefuls clashed on Wednesday (UK time) in what was the first presidential debate of the 2020 US election.

The news has now raised concerns about the health of his 77-year-old Democrat rival, Joe Biden.

Nancy Pelosi, the Democrat Speaker of the House, is currently third in the line of command after President Trump and vice-president Mike Pence.

White House staffers and senior members of Government are likely to also undego coronavirus tests in the coming hours after the President’s diagnosis.

The presidential line of succession is currently outlined in amendements 12th, 20th and 25th  as well as Artcile II of the US Constitution.

The Presidential Succession Act of 1947 adds additional information on who would act as president in the event of both the presidential and vice-presidential seats becoming temporarily or entirely vacant at the same time.

8.33am update: Margaret Ferrier under fire for breaking COVID rules

SNP Westminster leader Ian Blackford has said Margaret Ferrier will have to “do the right thing” after breaking Covid-19 rules.

Speaking on BBC Radio Scotland’s Good Morning Scotland programme, he said she had made an “enormous error of judgment”.

Pressed if she should resign, he said: “I would say to her that her position isn’t tenable given the circumstances that we are in and she has to accept her own responsibilities for what she must do.”

He added: “It’s important that it is beyond reproach that everybody, absolutely everybody must obey the rules and we have to think about the signal that gives the public and the sacrifices that people are having to make and it’s in the light of that that Margaret will have to do the right thing.”

7.28am update: Covid-19 restrictions will ‘stay for at least a year’ even if a vaccine is found

New coronavirus restrictions could remain in place for at least a year even if a vaccine is found, scientists have warned.

Professor Nilay Shah, from Imperial College London, said: “There’s no question of suddenly life returning to normal in March, even if…we having a following wind.

“It will take a long time to work through the different priority groups initially, and then the wider population later on.

“To get through that vaccination process, it (will take) many months, maybe more than a year.”