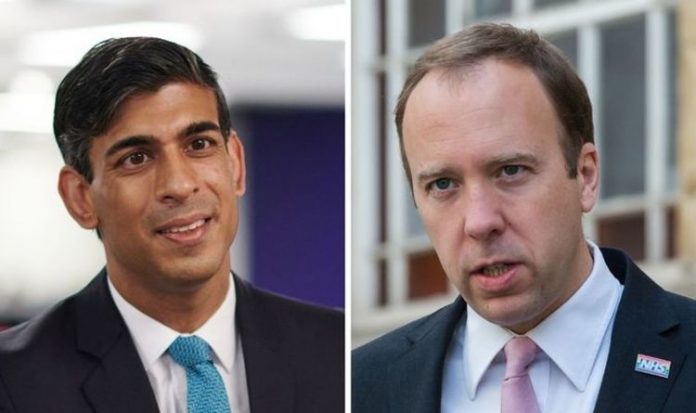 The Prime Minister is understood to have seen Chancellor Rishi Sunak, and Health Secretary Matt Hancock, clash over key elements of the Government’s three-tier lockdown system. The Government drew up a tiered lockdown system, which was set to be announced today, during a sub-committee meeting on Monday. The system would see a green to red level system, ranging from maintaining the ‘rule of six’, to closing hospitality measures.

During the meeting, Mr Sunak called for more certainty over the triggers for lockdowns if the public is needed to back the system.

Following the meeting on Monday, the committee broke without an agreement, according to The Times.

Despite that, Mr Sunak will be consulted over any measures to shut down hospitality venues or businesses.

One source said: “There’s been unease about the way decisions are happening. It’s opaque.

“Rishi was pushing for clearer lines.”

Mr Sunak has come under fire for the ‘Eat Out to Help Out’ scheme, which some stated helped cause a spike in cases.

Although the scheme provided a vital lifeline to the hospitality sector, some MPs have accused the scheme of helping the virus spread in some areas.

In response to the criticism, Mr Sunak said it was too simplistic to draw conclusions between the virus and the scheme.

Due to the infringement of civil liberties, Mr Johnson had faced the threat of a party rebellion over the ‘rule of six’.

In order to stop a party rebellion, Mr Johnson approved a reciprocal vote on the measures and further restrictions going forward.

Now given a vote, MPs overwhelmingly backed the legislation 287 to 17 on Tuesday.

Despite voting for the legislation, chair of the 1922 Committee, Sir Graham Brady voiced concerns over the rule while being one of the 17 Tory MPs to go against the Government.

Sir Graham said: “These rules are a massive intrusion into the liberty and private lives of the whole British people and they are having a devastating economic effect as well which will result in big job losses and masses of business failures.”

Tory MP for Bexhill and Battle, Huw Merriman said: “I do not see the evidence in terms of how this will reduce the rates of Covid.

“My biggest concern is we are ruling by consent, we need people to come with us.

“When people look at these rules, people I speak to who have been absolutely religious devotees of lockdown, they now say I’m just not going to do this anymore.

“And the concern is that they won’t follow some of the other rules that do make sense that we should have in place.”