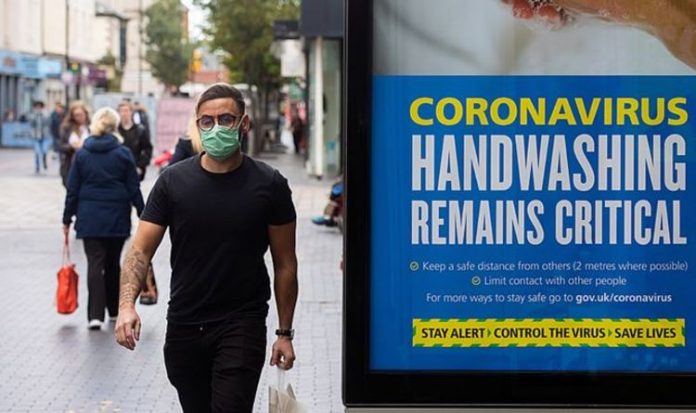 The list of areas where it is illegal to meet indoors in places such as pubs now includes Liverpool, Warrington, Hartlepool and Middlesbrough. Newcastle, Manchester and Birmingham, as well as large parts of Wales and areas in Scotland and Northern Ireland, are also under tight control. The new lockdowns mean around 22.4 million people – 34 percent of the UK population – face some form of extra controls.

Health Secretary Matt Hancock said there were early signs that restrictions imposed in the past month were beginning to work.

But announcing the new curbs yesterday, he said the second virus peak was “highly localised” and “spreading fast” in some areas.

He told MPs that action was needed in Liverpool, where there were 268 coronavirus cases per 100,000 people.

The measures announced for Liverpool City Region, Warrington, Hartlepool and Middlesbrough follow similar rules in the North-east earlier this week. They would come into force at 12.01am tomorrow.

Yesterday’s announcement sparked an angry reaction from Middlesbrough mayor Andy Preston, who said: “We defy the Government and we do not accept these measures.”

But he said later he would obey the law and urged others to do so.

Labour leader Sir Keir Starmer has called for a “rapid review” of the lockdown strategy, especially the 10pm curfew.

In his Commons statement, Mr Hancock said: “We recommend against all social mixing between people in different households.

“We will bring in regulations, as we have in the North-east, to prevent in law social mixing between people in different households in all settings except outdoor public spaces like parks and outdoor hospitality.

“We also recommend that people should not attend professional or amateur sporting events as spectators in the areas that are affected.”

Mr Hancock also advised people should visit care homes only in exceptional circumstances and against all but essential travel, adding: “Essential travel of course includes going to work or school.”

The latest figures show the Knowsley area of Liverpool had the second highest infection rate in the country at 262 per 100,000 on September 27.

Burnley, where no further restrictions have yet been imposed beyond the Lancashire-wide ones already introduced, has the highest infection rate in England at 327 per 100,000.

Mr Hancock said local authorities had been consulted and there would be a £7million package of support for councils affected.

However Liverpool’s Labour mayor Joe Anderson said that was “nowhere near enough” and Knowsley council leader Graham Morgan feared the latest curbs would not stop the virus spreading.

He said: “It’s a bit like the Hotel California – you can check out but you can never leave.

“Other areas have gone into restrictions and months later they are still there.We can’t afford that.”

Mr Hancock also said Bolton would be “brought in line” with the rest of Greater Manchester, easing takeaway-only restrictions on the town’s pubs and restaurants.

There will be no organised Bonfire Night events or New Year’s Eve fireworks display and the annual Christmas lights switch-on is also axed.

Meanwhile, in a blow to half-term travellers, Transport Secretary Grant Shapps removed Turkey, Poland and the Caribbean islands of Bonaire, St Eustatius and Saba from the UK’s list of safe travel corridors.

Holidaymakers arriving from the five destinations after 4am on Saturday must self-isolate for 14 days. Poland’s seven-day rate of new virus cases per 100,000 people is now 25.9, up from 15.6 in the previous week.

“Clearly it’s now looking to be a huge problem heading to the likes of Antalya, Bodrum, Kusadasi and Marmaris for a week and then having children self-isolate at home.

“I don’t think many head teachers will accept a 14-day sick note.

“It’s also another hammer blow for the desperately fragile UK travel industry, which had gambled on a strong October in Turkey by laying on extra flights and booking more hotel rooms.”

A seven-day rate of 20 new cases per 100,000 people is the threshold above which the Government considers triggering quarantine conditions.

Italy was not mentioned despite its weekly infection rate rising from 18.4 to 20.4 cases.