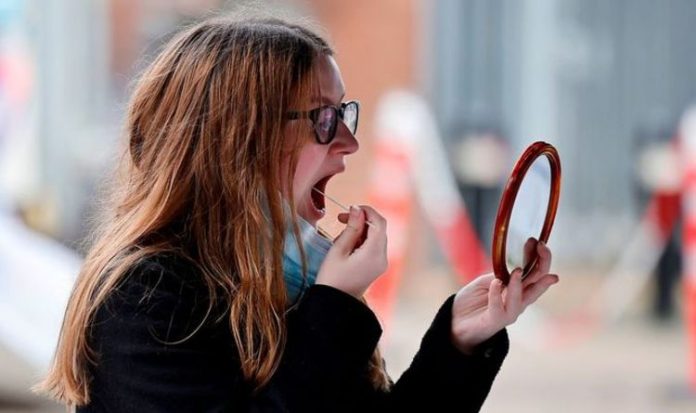 Firms with more than 50 employees have access to the test kits which take less than 30 minutes to produce results. Officials said the move is part of efforts to “normalise” testing in the workplace.

The lateral flow tests will also ensure the safety of those who cannot work from home by identifying asymptomatic carriers of Covid-19.

Health Secretary Matt Hancock said: “To save lives and protect the NHS, we have again asked for everyone to work from home.

“But we know that for some this is not possible, which is why the workplace rapid testing programme is so important.

“Employers should regularly test their staff, and this drive across Government to raise awareness and encourage more businesses to introduce rapid testing for employees is incredibly important.

“When you consider that around one in three people have the virus without symptoms and could potentially infect people without even knowing it, it becomes clear why focusing testing on those without symptoms is so essential.

“We are already working with many employers to scale up workforce testing, spanning the food industry, retail sector, transport network, and across the public sector too.

“I strongly urge businesses and employees across the country to take up this offer of rapid testing to help stop this virus spreading further.”

NHS Test and Trace said that, as of January 29, it had provided Transport for London (TfL) staff with 2,173 tests, identifying 28 positive cases who would have otherwise continued working alongside colleagues.

READ MORE: Bill Gates predicted when ‘life will be much closer to normal’

According to Government statistics, 112 UK organisations have so far signed up to take part in mass testing, with employees being tested across 500 sites.

Business Secretary Kwasi Kwarteng said: “We want to be able to reopen the economy and recover our way of life as soon as it is safe to do so, and large-scale workplace testing will complement our work in getting the British people vaccinated.”

Dan Shears, GMB union’s health, safety and environment director, said: “These rapid tests are not a magic bullet, and it is vital that employers understand the limitations and take steps to address them.

“Everyone wants to ensure that infectious workers keep away from the workplace, but this means getting the introduction of testing right – with confirmatory testing to avoid ‘false negatives’ and crucially ensuring that all protective measures to reduce transmission are implemented to the maximum.”

“This is even more important when the most recent data shows hundreds of outbreaks in workplaces since the start of January.”