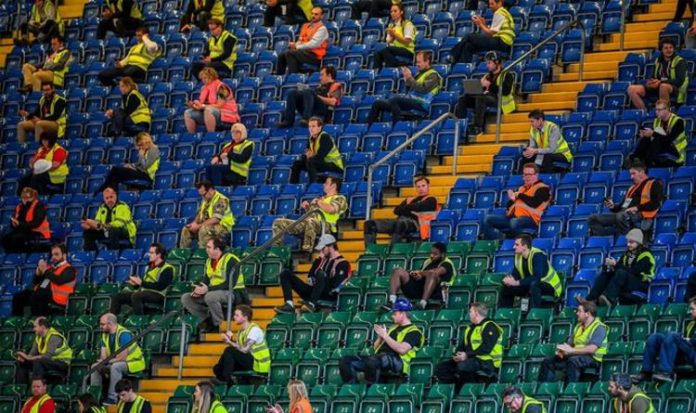 The Government is currently on track to vaccinate the 15 million most vulnerable people in the UK by February 15.

However new modelling from Warwick University, commissioned by SPI-M, warned early relaxation of rules could lead to a third spike in deaths.

In addition, social distancing will be required throughout the year unless the bulk of the population is vaccinated and vaccines are at least 85 percent effective in blocking the virus.

According to the Daily Telegraph other modelling ordered by SPI-M, from the London School of Hygiene and Tropical Medicine and Imperial College London, reached a similar conclusion.

Speaking to the paper, a source said: “The exact numbers differ, but there is a high degree of consensus.”

The modelling suggests even if the vaccines do block 85 percent of Covid transmission lockdown will be needed until the end of May to avoid a third period of high deaths.

The report states: “While the novel vaccines against SARS-CoV-2 offer a potential exit strategy for this outbreak, this is highly contingent on the infection-blocking (or transmission-blocking) action of the vaccine and the population uptake, both of which need to be carefully monitored as vaccine programmes are rolled out in the UK and other countries.”

It warns if the UK partially unlocks after the most vulnerable have been vaccinated in mid-February a third wave of deaths will follow two months later.

If the vaccine blocks 80 percent of transmissions this will peak at around 1,000 deaths a day, similar to last spring, versus 1,500 a day if it is 60 percent efficient.

Speaking to the Daily Telegraph Dr Sam Moore, who helped write the report, said coronavirus is so infectious even with the vaccine it may be difficult to keep the ‘R rate’ below one.

The ‘R rate’ refers to how many people the average Covid patient infects and if it’s above one it means the virus is spreading exponentially.

Dr Moore said: “There is definitely a sort of threshold.

“If we get very high infection blocking then this could almost be what delivers us from it, but it would have to be very high.

“Even vaccines with 85 percent infection blocking are insufficient to drive ‘R’ below one on their own.

“The vaccines are not going to be 100 percent effective at stopping serious disease.

On Saturday the Government announced another 1,200 people had died within 28 days of a positive coronavirus test.

The UK has now administered 12.5 vaccines per 100 people, around five times the EU figure.