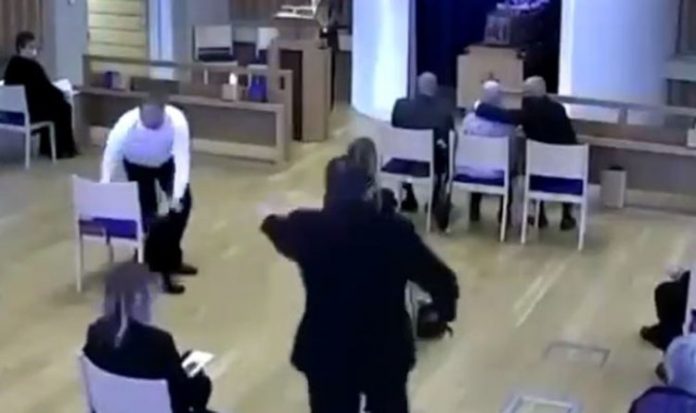 Furious Britons have expressed their rage and heartbreak at a video of family members being told off for comforting each other at a funeral. A woman at her late husband’s service at Crownhill Crematorium in Milton Keynes was scolded after her son, who is reportedly in her support bubble, tried to sit next to her. Currently no more than 30 people are allowed to attend a funeral under coronavirus rules and must be kept two metres apart.

In the footage of the socially distanced funeral, which has gone viral on Twitter, the son can be seen moving his chair next to his upset mother.

After this another man breaks the distance to move next to the widow as well.

As yet another attendee starts to move, a staff member can be seen entering to tell them not to.

He can be heard saying: “You have to put the chairs back I’m afraid. We can’t move the chairs, we’re told.”

After being told off, the two men move their chairs back to being distanced.

The mourner later said: “We are absolutely heartbroken…I can sit in a restaurant, I can sit in a pub, I can live at her house, I can travel in a limousine to the crematorium with six people.

“When I want to give my mum a cuddle at dad’s funeral, a man flies out mid-service shouting stop the service and makes us split.”

Speaking to miltonkeynes.co.uk, he added: “It scared my daughter and shocked everyone in the room. This is not how funerals should be and with the guidelines in place for pubs, bars, public transport etc, how this can carry on at funerals is beyond belief. It was a devastating day made even worse.”

Conservative commentator Darren Grimes posted the video online, writing: “It really does highlight the cruel lack of humanity and decency in the way in which we’re forced to live our lives today.”

Anne Huer added: “What have we become? COVID is no excuse to be without compassion.”

Local Conservative group leader, Councillor Alex Walker was equally disturbed by the video: “It’s a horrible sign of the times where common sense has seemingly disappeared. These people were in a bubble together, to support each other through the death of a loved one.

“I’ll be asking for a review of how MK Council is holding weddings and funerals. It’s essential we keep people safe and it’s essential we follow the rules, but it’s equally important we try and live with the virus.

“It’s been with us for six months, we are getting better at living with it. I’m confident Mk Council can hold funerals and weddings in a better, more compassionate way while sticking to the rules designed to keep us safe.”

Good Morning Britain host Piers Morgan announced that the distraught family will be joining the ITV show on October 6 morning.