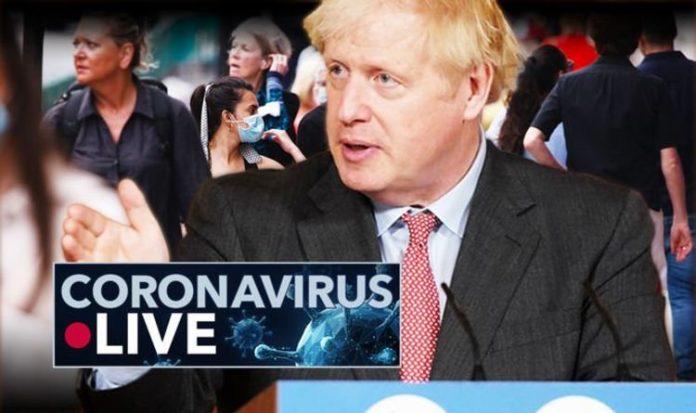 Different areas of the country will be split up into “medium”, “high” or “very high” local coronavirus alert areas depending on their rates of transmission. The Prime Minister held a telephone conference with Cabinet colleagues yesterday to explain the new guidance with local leaders in the north of England. Tier one restrictions are believed to include a 10pm hospitality curfew and a ban on most gatherings of more than six people.

Tier two restrictions are likely to be similar to rules currently in place in Middlesbrough and parts of the North East, where indoor mixing of households is not allowed.

Two households may be allowed to meet in a private garden, as long as the rule of six and social distancing are followed.

So far, the city known to be facing the highest tier 3 restrictions today is Liverpool.

Steve Rotheram, mayor of the Liverpool City Region, said negotiations were ongoing with the Government.

He said: “We have been clear that new restrictions must come with the financial support to protect jobs and businesses.

“A deal is not a deal until it is agreed.”

Elsewhere, Nottingham continues to have the highest rate in England, with 2,763 new cases recorded in the seven days to October 8.

7.30am update: Britain bracing for rules that will be ‘really hard to stomach’

A senior Conservative told Playbook: “This is the moment where we enter the next phase.

“It’s going to be really hard to stomach, it’s going to go on for some time, and if people don’t follow the rules then we may have to go further still.

“People in all areas of the country should be under no illusion, we are back to where we were in March, this is going to be sh*t and it may get sh*tter yet.”