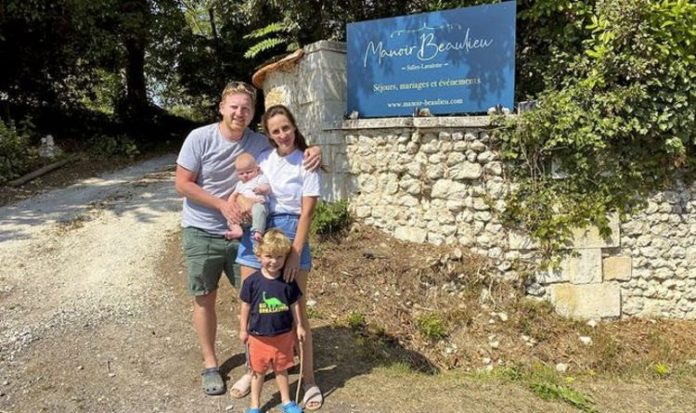 James and Lauren Crease quit corporate jobs in Manchester and moved to France with their 18-month-old son Oscar. The country held a special significance for them as they spent their first holiday together there and both had childhood memories of family holidays. They saw 40 houses before coming upon a manor house just within their budget.

“We knew as we were coming up the drive that this was the one,” Lauren, 32, explained.

“It was just stunning. It’s an 18th-century property with a pool, orchard and outbuildings all within 1.5 hectares of beautiful landscape.

“We fell in love with it. But it needed a lot of work. It was pretty grim.”

By Oscar’s second birthday, Manoir Beaulieu had been purchased.

The Creases felt they were officially living the French dream in the village of Salles-Lavalette, nestled in the Charente/Dordogne border of south-west France.

But after Lauren got pregnant again, and having worked their fingers to the bone to prepare the house for guests, their first full summer season was wiped out by the pandemic.

The couple, whose story is to be featured on Channel 4 next month, are hoping business will pick up in 2021.

They told how the retreat now boasts an abundance of modern touches as well as a swimming pool and terrace dining. The adjoining barn has a 200-inch cinema screen and sound system with access to Netflix.

The lack of holidaymakers was initially a bitter blow.

“We couldn’t believe it,” Lauren said. “Our families had been over to help us gut the place and landscape the outside and we were ready for a great summer.

“At seven months pregnant we were determined not to take our foot off the gas. I was sanding ceilings, making headboards and James was working all the hours and, of course, we had a two-year-old to look after too. It was stressful to say the least.”

But all was not lost, and after baby Eli was born in a local hospital in June, the couple’s fortunes changed when the French decided that staycations were the way forward.

As a result Manoir Beaulieu, which sleeps up to 14, was filled with locals.

The couple, who live in one of the outbuildings, hope their endeavours will attract British guests once the pandemic is over.

And they have some surprise finds to finish off the grand property.

“When we moved in we found hundreds of French comics in the attic. We’re going to frame and sell them, they look great,” James, 35, added.