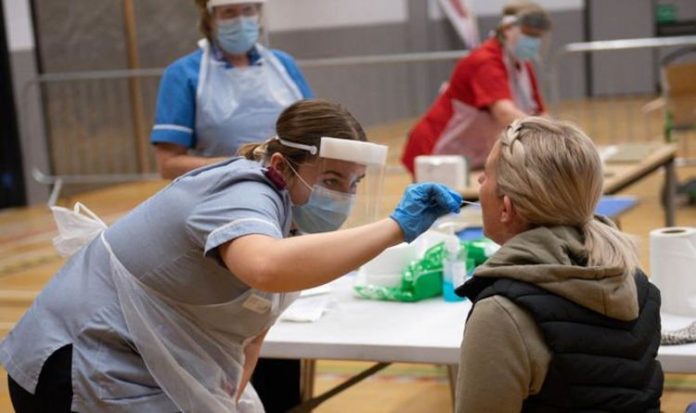 The kits are currently being mass tested in Liverpool where 50,000 are said to have used them. But nearly 1,000 frontline medical and council staff in Stoke were the first to try them in late October. Yesterday another 160 were made available and the public queued at Dimensions Leisure Centre in Tunstall. Among the first to have one was Sarah Key.

Of those 160, seven were positive. Six had mild symptoms not typical of Covid and one had no symptoms at all.

Those who did have a positive result were asked to return for a further test and received support and advice.

The trial came after the city saw 302 cases of Covid-19 in a single day, with infection rates continuing to climb.

Council leader Abi Brown said not enough people were being tested as cases rose at an “alarming rate”.

She added: “By using this new technology, we can speed up how quickly people receive their results and can safely get back to work, school and their daily lives.”

The Government has announced 600,000 of the tests will be distributed across the UK.

Meanwhile, 90,000 Liverpool residents – 18 per cent of the population – have taken part in a mass testing pilot in its first week, said the city’s mayor.

Joe Anderson said 430 people had tested positive, with only 200 showing symptoms. He said: “Four hundred and thirty people are not spreading the virus. It means we can break the chain of infection.”

Rapid Covid tests to let people visit elderly relatives and friends inside care homes are to be trialled next week.

Around 30 sites will try the system, designed to end the heartbreak of famiies being separated, from Monday.

The Prime Minister’s spokesman added: “Our priority is protecting care home staff and residents but we do know just how important it is to let residents safely meet their loved ones.”

“It’s heartbreaking not being able to see your loved ones…but we must not get into a position where coronavirus takes root in the care homes – we’ve all seen how that works out,” he added.

• Macer Hall is the Political Editor at the Daily Express