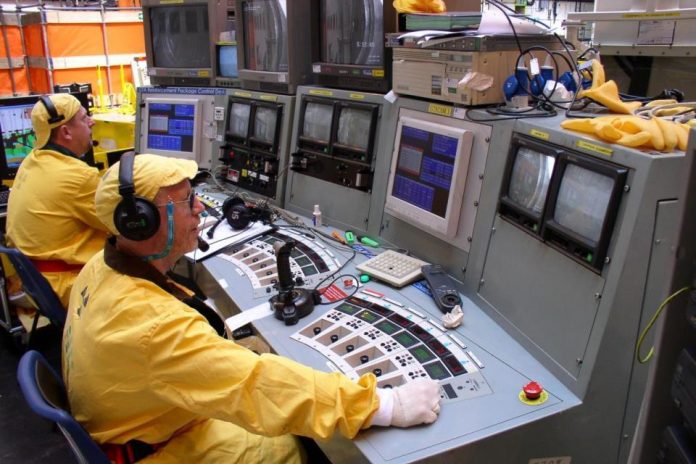 The ‘reactor in-core inspection desk’, which was used to remotely check conditions deep inside the reactors at Sizewell A Site, was last used in 2005 just before the site stopped generating electricity.

The desk was a vital piece of equipment to help the site safely generate low-carbon electricity for 40 years. Considered cutting edge technology at the time, the desk allowed the operators to identify any maintenance or repairs needed inside the reactor core.

As work to decommission and clean up Sizewell A progressed, the desk became redundant and needed to be disposed of. Once it was carefully inspected and certified as free from contamination, Magnox’s disposals contract partner, Ramco, took on the job of finding it a new home.

Having ‘one careful owner’ for the past half-century, and being a unique design piece, ensured plenty of interested bidders in the recent auction, but the highest bid of £10,200 was placed by a film studio based near Oxford.

The company has previously been involved with productions such as World War Z, Iron Man 2 and Harry Potter and the Deathly Hallows.

Disposing of the desk in this way has recycled equipment that would have otherwise required months of painstaking work to dismantle for scrap.

Caron Weaver, Engineering and Asset Management Director, said: “This sale proves that there is still value in Magnox assets if we are willing to look at what we have and find out if there is a market for them.

Our mindset is changing to ensure we exploit our assets and not follow the norm and throw them away as waste; this sale alone has saved Magnox in the region of £10,000.

Before we throw away any item we must consider reuse and we must achieve best value for the Nuclear Decommissioning Authority, the UK tax payer and, most importantly, the environment through reuse and resale.

Sizewell A’s Disposal Manager, Mark Thurston, added: “Each section would have taken two people at least one week to dismantle for scrap, so this has saved valuable time and brought a small profit. I look forward to spotting it in a film at some point in the future!”