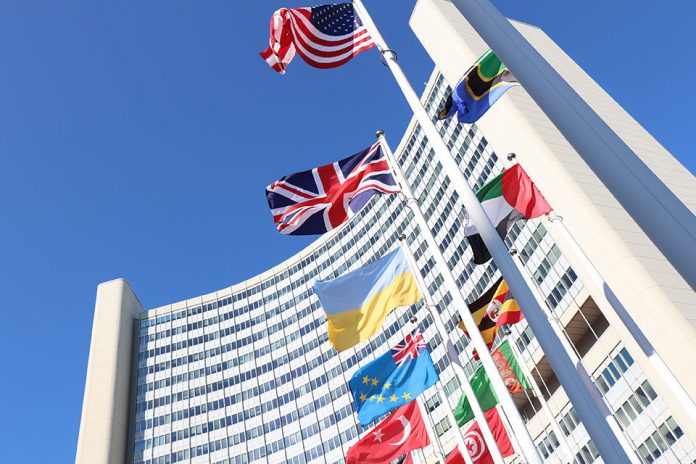 As participants to the JCPoA, we reiterate our continued commitment to the preservation and full implementation of the nuclear agreement. We E3 have worked hard to preserve the agreement. We have been consistently clear that we regret the US withdrawal from the JCPoA and re-imposition of US sanctions. We have lifted
sanctions as foreseen by the JCPoA and taken additional efforts to allow Iran to pursue legitimate trade, by developing the financial mechanism INSTEX.

However, despite these good faith efforts, Iran has engaged, for a year and a half now, in numerous, serious violations of its nuclear commitments. We continue to be extremely concerned by Iran’s actions, which are hollowing out the core nonproliferation benefits of the deal. Advancements on Research & Development have
irreversible consequences.

We are concerned at Iran enriching uranium above the 3.67% JCPoA limit, and the continued growth of its low-enriched uranium stockpile, which is now 2443 kg. This is a dozen times the JCPOA limit. Contrary to the JCPoA, Iran is using advanced centrifuges for the production of low-enriched uranium (LEU). Contrary to the JCPoA,
Iran is also enriching at Fordow: this facility has no credible civilian use.

On top of this, Iran has announced that it intends to install advanced centrifuges at the Fuel Enrichment Plant at Natanz. The IAEA report confirms this process has already started: one full cascade of IR2m centrifuges is now installed at the FEP, as well as some IR4 centrifuges. The report also indicates that these cascades will continue to accumulate uranium. The IAEA reported on 17 November that the process of feeding the IR2m cascade with UF6 has now been initiated.

The JCPoA is clear that all centrifuge research and development should be undertaken at the PFEP. The JCPoA is also clear that only IR-1 centrifuges may be installed at the FEP for enrichment purposes and that their number is limited to no more than 5060. Iran’s latest decision to change the location of its research and development activities, which are already being conducted in ways that are inconsistent with the JCPoA, as well as increasing the overall number of centrifuges installed at the FEP, is a matter of deep concern. It makes it easier for Iran to expand its activities with advanced centrifuges in the future should it decide to do so. The FEP has space for thousands of additional centrifuges, therefore moving advanced centrifuges to a larger space raises serious concerns about Iranian intent. We urge Iran not to proceed with the installation of advanced centrifuges at the Fuel Enrichment Plant, and its plans to move its R&D facility to the FEP. These activities constitute a
further violation of the JCPoA and send an unacceptable signal to the broader international community that has rallied in support of preserving the JCPoA.

It is now critical that Iran immediately reverses its steps and returns to full compliance with the JCPoA without further delay. We remain committed to working with all JCPoA participants to find a diplomatic way forward and we intend to pursue these discussions within the framework of the JCPoA.

We commend the Agency for its continued and intense efforts to engage Iran in a substantial dialogue to evaluate Iran’s declarations under its Additional Protocol.

We take note of Iran’s implementation of its legal obligations under the Additional Protocol to its Safeguards Agreement by providing the IAEA with complementary access to sites and locations in Iran, including access to two locations which were the subject of this Board’s attention recently. We expect Iran to fully cooperate with the
IAEA in accordance with its nuclear obligations, including by answering all questions that the Agency may have in the coming months once the proper evaluation of the samples taken at these undeclared locations is completed.

Paragraphs 33-35 of the Director General’s report clearly state that Iran’s responses to questions on the presence of uranium particles of anthropogenic origin detected at an undeclared site, which were provided by Iran after very significant delays, were ‘not technically credible’. These delays and unsatisfactory responses are unacceptable.
We welcome the DG’s clear reporting on this matter and his efforts to follow up the issue with Iran.

In June, this Board, in a Resolution adopted by a large majority, called on Iran to comply with its safeguards obligations and to cooperate fully and without delay with the Agency. We recall Iran’s legally binding safeguards obligations. In order to alleviate concerns over possible undeclared and unaccounted for nuclear material and
activities, it is of critical importance that Iran should promptly provide a full and accurate explanation to the Agency on this issue, as well as on other safeguards-related issues being currently investigated by the Agency. We would welcome further updates, as appropriate, to the next Board of Governors, as the investigation progresses.

We once again thank the IAEA for its latest quarterly report on Iran and express our full confidence in its capacity to engage its mandate in a rigorous and impartial manner.

We call on the Agency to continue to provide further detailed technical updates, as appropriate, and would welcome a decision to make its latest quarterly report public.