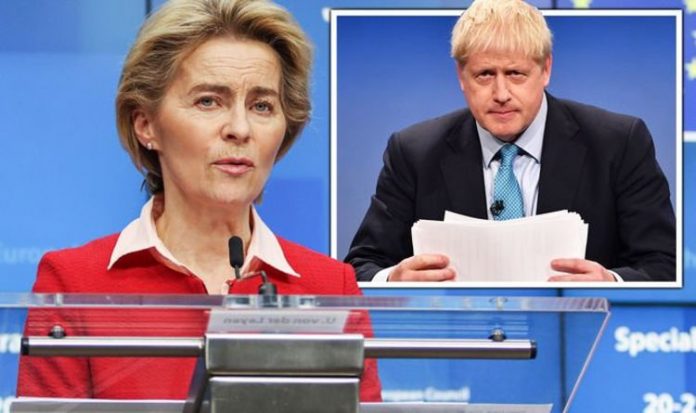 Prime Minister Boris Johnson is pressing ahead with plans to publish new laws which would “annul” parts of last year’s Brexit withdrawal agreement, despite a Tory backlash spearheaded by his predecessor, Theresa May. Today, the Government is expected to outline the controversial legislation that will give themselves the powers to limit checks and EU influence in Northern Ireland in the event that no trade deal can be struck between the UK and EU by the end of the transition period. Brandon Lewis, the Northern Ireland secretary, admitted the legislation “does break international law” in limited ways and the head of the Government legal service, Jonathan Jones, resigned over the issue.

Ministers will allow MPs at least four days to debate the legislation on the floor of the Commons.

Ministers will claim there is precedent for breaking international law, including during Canada’s moves to legalise cannabis.

In a recent CapX report, though, Lee Rotherham, the former director at Special Projects at Vote Leave, argued any safeguards clause that ends up before Parliament will have been included for a good reason, as it is both an insurance, and a deterrent.

The prominent eurosceptic claimed there are plenty of warning signs to “alert us not to rely on blind trust”, particularly because Brussels has blatantly broken rules to “maliciously target the UK” in the past.

He explained: “It was odd in particular to see Sir John Major as such a partisan of remaining in the EU, after enduring the gross abuse of Health and Safety clauses being miscited to get around his Social Chapter opt outs.

“The same trick was still being used two decades later to allow the Commission a legislative foothold in North Sea production, after a range of attempts through other treaty clauses had failed.

“The most celebrated abuse has been relatively recent, with the ‘Disaster Clause’ being twisted during the eurozone crisis to provide a legal basis for intervention, while forcing the opt-out countries to stump up billions.”

Mr Rotherham noted: “But even before the UK had joined, and as the 1972 accession talks were about to resolve territorial waters, the Founding Six set the precedent by twisting the existing acquis to reinterpret the supposedly fixed treaties, expanding from Brussels regulating over trade in fish products into having management of the fisheries themselves.”

The eurosceptic’s view does not appear to be shared by British academics, though.

An expert in international dispute resolution at the British Academy shed light on the consequences Britain would have to face if Mr Johnson decides to rewrite the withdrawal agreement.

Professor Holger Hestermeyer argued the move could lead to a “right royal mess”.

He wrote on Twitter: “National law that is passed in contradiction of treaty obligations cannot overwrite these obligations – as it is in breach of them.

“The outcome then is that the national courts will apply national law+EU law – but this will violate international obligations.

“Sometimes this can lead to a right royal mess.”

The expert added: “See the US and the death penalty.

“The International Court of Justice ruled against the US twice.

“But US states ignored that.”