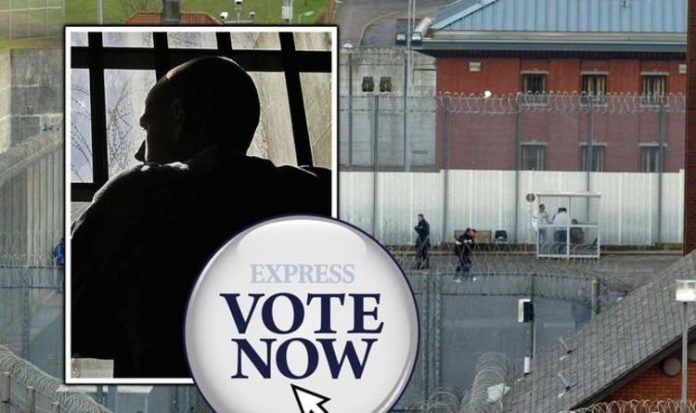 It comes off the back of Conservative MP Philip Davies writing for Express.co.uk that people do not feel they are being kept safe and believe criminals are not being locked up for long enough. The Member of Parliament for Shipley, West Yorkshire, was talking about the strong views received on the doorstep of his constituency.

Mr Davies wrote: “Not only, for example, do many prisoners only serve half of their sentence, a number serve less than half – even a quarter in some cases. Never mind half price sentences – these are bargain basement ones – and, unfortunately, the only beneficiaries are the criminals.

“Then, some of these prisoners who are released early reoffend or breach their licence conditions.

“They are not, however, necessarily then returned to prison to serve the rest of their prison sentence – as many will believe is the very least that should happen on account of them having been let out early in the first place.”

He argued people across the country have lost faith in the justice system.

The MP added: “Thankfully, sentencing is once again in the spotlight with the Government’s White Paper being recently released.”

Writing in the Sunday Express recently, Prime Minister Boris Johnson announced some major proposals, including reducing the age for which life sentences can be handed down.

Number 10 also wants to increase maximum sentences for those who assault emergency workers to two years in prison.

And today, speaking to MP Esther McVey for the Blue Collar Conservatism conference, Home Secretary Priti Patel backed the Prime Minister’s words and said urgent action eeded to be taken against those who attack police and other emergency workers.

Ms Patel said: ”Last year alone there were 30,000 assaults on police officers, which is completely unacceptable.

“But we are also committed to doubling the sentences to those individuals that perpetuate crimes against our emergency workers, and that also includes our police officers.

“That is a commitment that we are absolutely dedicated to and legislation is going to be forthcoming on that, alongside the work we are going to do to enshrine the police covenant into law.

So what do you think? Are reforms urgently needed? Is prison working? Vote above and leave your views in the comment section below.