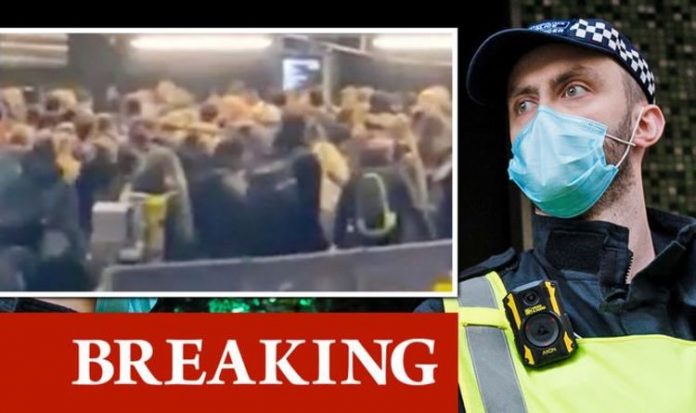 Yesterday Boris Johnson announced London, Kent, Essex and Bedfordshire would enter a new Tier 4 from today. The Prime Minister told people to stay at home as he announced the planned relaxation of rules for Christmas would be scrapped. Now the Government has deployed British Transport Police to ensure people only take essential journeys, after hundreds of people fled the capital ahead of the new restrictions last night.

Transport Minister Grant Shapps wrote on Twitter this morning: “Unfortunately the new #Covid_19 strain is up to 70 percent more transmissible!

“It’s vital to follow the new guidance to protect others & our NHS.

“If you’re in Tier 4 you must not travel – or stay away from home overnight. Stay at home!

The Department for Transport added: “BTP officers are in place to ensure that only essential journeys take place.”

Mr Shapps has said the extra police and transport staff will be deployed to London train stations to stop people making “unnecessary” journeys out of Tier 3.

He said: “Follow the guidance and please do not come to a station unless you are permitted to travel.”

Londoners fled the capital en masse last night after the announcement of the new Tier 4 restrictions.

Footage posted on social media showed London St Pancras and several other stations packed with people waiting to board trains and escape the city.

As of midnight the capital and other parts of the south east and east of England saw the harsh restrictions imposed.

People living in Tier 4 will be banned from leaving the city.