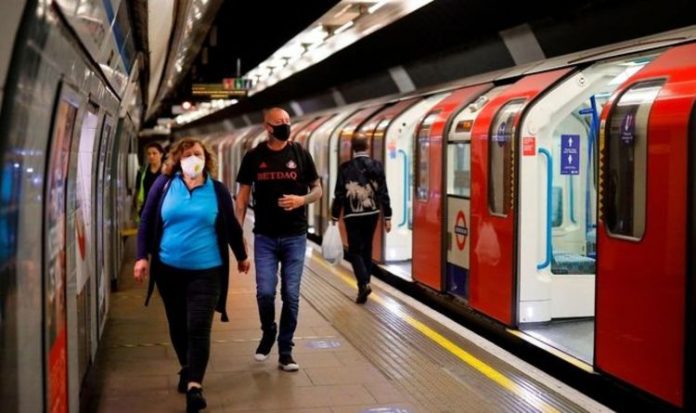 Just 46 fines were handed out by police up until August 17, according to figures released by the National Police Chiefs’ Council (NPCC). The data shows the majority of penalties were issued on public transport, with just eight fines given to people failing to adhere to the rules in shops and other indoor spaces.

The vast majority of fines, handed out by rank-and-file officers, were issued to white men under the age of 30.

The data does not include penalties issued by Transport for London (TfL) officers.

Boris Johnson later extended the rules on face masks to include shops and other indoor spaces from July 24.

Face coverings are not yet required to be worn in shops in Wales.

But Britons have responded furiously to the news that just a few dozen fines have been issued since the rules came into effect.

One person wrote on Twitter: “Pathetic. No leadership from Johnson or Hancock unlike Sturgeon.

“Mask wearing almost universal here. And if you do have an exemption you have to prove it.”

JUST IN: Boris Johnson hints at change of advice on face masks in schools

They wrote: “I don’t wear a mask and I’ve never been approached. If everyone did the same, it couldn’t be enforced.”

One user vented to Transport for London (TfL) about the supposed lack of enforcement of face mask regulations.

They wrote: “@TfL apparently only 38 fines have been issued for not wearing face masks, every time I’ve been on a train there are multiple people not wearing masks. Will there be more inspections on trains?”

A spokesman responded and said 344 fixed penalty notices have been issued by TfL officers to people refusing to wear masks.

He said: “I can tell you that enforcement is happening.

“Between 4 July and 26 August, 78132 people were stopped by TfL enforcement officers from getting on our public transport services until they put on a face covering.

“During the same period, 5612 people were prevented from boarding and 1462 were ejected from the service.

“There were also 344 Fixed Penalty Notices have been issued by TfL officers to those refusing to comply.

“FPNs are a last resort but they will be used where necessary.”