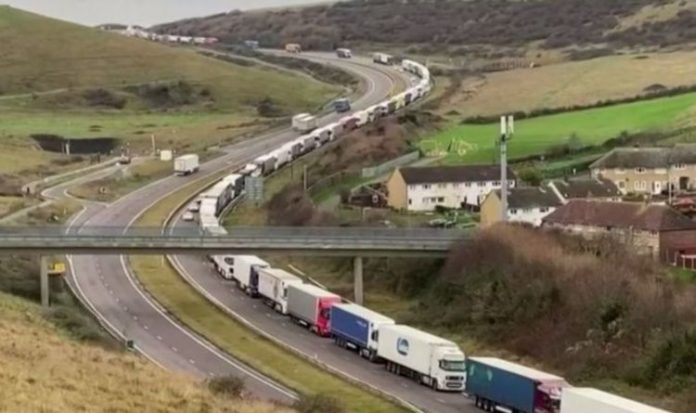 Lorry drivers now fear they might miss Christmas with their family after some of them have already spent up to five days stuck at the border with France. Speaking from Dover, Sky News correspondent Milena Veselinovic said the city was “absolutely full” as she showed footage of lorries parked on double yellow lines. She said: “If you just take a look over here there’s stacks of lorries parked one next to each other.

“They’re on double yellow lines but they don’t have any options.

“The city is absolutely full.

“They are absolutely everywhere. There’s a garage nearby where people have spent the night because they didn’t manage to catch the last ferry into France.

“We spoke to two drivers from Romania, they’ve been here for five days already actually and they’re worried that they’re going to miss Christmas with their families.

“The reason they’ve been here for so long is that there were issues here even before the French Government had imposed this ban on couriers.

“There were backed up lorries for miles on the approach to Dover because of Brexit stockpiling and because of the Christmas rush.

“And now there’s a real concern on what this action by the French Government will do to traffic here.”

The United Kingdom was on Monday shut off from much of Europe after its closest allies cut transport ties due to fears about a new strain of the coronavirus, sowing chaos for families and companies just days before it exits the European Union’s orbit.

France, Germany, Italy, the Netherlands, Ireland, Belgium, Israel and Canada shut off travel ties after Prime Minister Boris Johnson warned on Saturday that a highly infectious new strain of the virus was a danger to the country.

Johnson will chair an emergency response meeting on Monday to discuss international travel, in particular the flow of freight in and out of Britain.

France shut its border to the United Kingdom for people and trucks, closing off its most important trade artery with mainland Europe, a step Transport Secretary Grant Shapps said was surprising.

“I’m in touch with my opposite number in France and we’re doing everything we can to get that restarted, in fact they’ve said to us they want to restart the hauliers as quickly as possible,” Shapps told Sky.

Shapps said getting the bans lifted as swiftly as possible was his priority but that given British preparations for the end of the Brexit transition period, the country was prepared.

The British government triggered Brexit contingency plans to deal with transport delays in the southern English region of Kent.

Trucks are being stacked on the M20 motorway which is closed to normal traffic. A nearby airport will also be used to hold freight.

A No 10 spokesman said: “The Prime Minister will chair a Cobra meeting tomorrow to discuss the situation regarding international travel, in particular the steady flow of freight into and out of the UK.

“Further meetings are happening this evening and tomorrow morning to ensure robust plans are in place.”