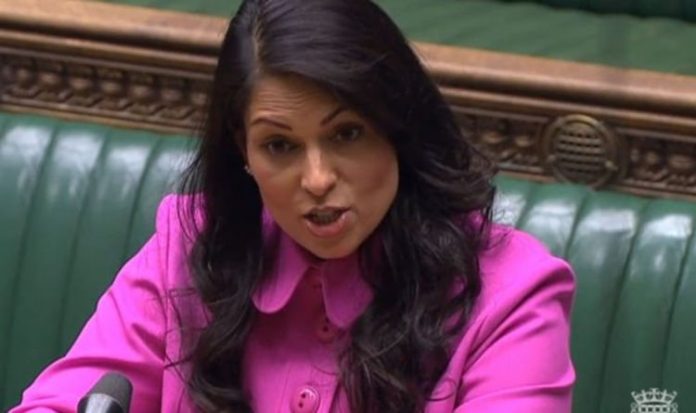 Ms Patel said she was “working to make this route unviable” by preventing boats from leaving France. Those who do manage to leave should be intercepted and sent back, the Home Secretary said. Immigration Minister Chris Philp will meet his French counterpart next week and Ms Patel is seeking talks with her opposite number. At least 235 migrants made the dangerous journey on Thursday, setting a new single-day record. They included a baby, seen being carried ashore.

Crossings continued yesterday as the warm and sunny weather brought calm waters, with young families and pregnant women spotted travelling across the world’s busiest shipping lane. Children, including a girl of about eight, were among 30 brought into Dover yesterday lunchtime.

In all, more than 130 migrants arrived yesterday on 13 boats.

Ms Patel said: “We also need the co-operation of the French to intercept boats and return migrants back to France.

“I know that when the British people say they want to take back control of our borders – this is exactly what they mean.

“The number of illegal small boat crossings is appalling and unacceptably high. The figures are shameful. France and other EU states are safe countries. Genuine refugees should claim asylum there, not risk their lives and break the law by coming to the UK.

“This is complex to do and we face serious legislative, legal and operational barriers”.

READ  Should Meghan Markle and Harry lose ALL titles and patronages due to Oprah row? | Royal | News (Reports)

Almost 4,000 migrants have crossed the Channel to the UK so far this year, compared with 1,850 in the whole of last year.

An estimated 7,500 migrants will come to England using this route this year if the trend continues.

Migrants have told how they are threatened with extreme violence if they refuse to board boats.

One Kurdish Iraqi man, who was charged £3,000, said: “When it came to boarding I didn’t want to get in because the sea was very rough that night and I cannot swim. I was very afraid. The smuggler pulled out a gun and held it to my head. He spoke my language and said, ‘There is no way back’.”

Home Office sources last night confirmed the department has asked the Ministry of Defence for Royal Navy ships to be deployed to the English Channel.

A source said: “The final straw was this record number, which led the Home Secretary to demand this new initiative.

“The real solution must come from the French – we want the French to take them back. We are looking at what more assets may need to be deployed. This could involve the navy potentially.”

It is understood smaller craft would be used, rather than large frigates or destroyers.

A Whitehall official added: “We do not want to put the navy in if all it does is act as a magnet for more people to come over.

READ  Royal news: Princess reveals why she would NEVER 'do a Megxit' | Royal | News (Reports)

“We do not want the navy to be a taxi service.” Defence Secretary Ben Wallace is said to be waiting for advice from officials and taking stock of the situation. But a MoD source claimed the idea of sending in the navy had “more holes in it than a slice of Swiss cheese”.

They branded it impractical and unnecessary, adding: “It is a completely inappropriate and disproportionate approach to take. “We don’t resort to deploying armed force to deal with political failings. It’s beyond absurd to think that we should be deploying multimillion pound ships and elite soldiers to deal with desperate people barely staying afloat on rubber dinghies in the Channel.

“It could potentially put people’s lives at even greater risk.

“Border Force is effectively the Home Office’s own navy fleet, so it begs the question what are they doing.”

Dover MP Natalie Elphicke said it was absolutely essential to stop the crossings and that people picked up in UK waters should be returned to France straight away.

She said: “Putting an end to the small boats crossings crisis will only happen when migrants and traffickers alike know they won’t succeed in breaking into Britain in this way.”

When the Home Secretary starts talking about sending in the Royal Navy you know it’s serious. Yet the problem of the illegal migrant boat crossings has been serious for several years.

It’s not through lack of trying to stop this flotilla of human misery.

British police are working with French counterparts to patrol the Calais coast to prevent boats getting in the water. Twenty-one people traffickers profiting from this serious crime bonanza have been prosecuted, and hundreds of those reaching the UK this year have been deported.

The problem is that it’s hundreds out of the thousands who are still here. I share taxpayers’ fury at our money going on accommodating people who have entered the UK illegally when we already offer generous safe haven for genuine asylum seekers who make their applications legally from safe countries such as…France.

The problem could be solved speedily if the French agreed to intercept boats in the water, returned the passengers to French territory and dealt with them under the EU’s Dublin protocols there. Instead that only happens if they voluntarily come aboard when at risk of sinking.

For those that make it to British waters Border Force, the Royal Navy, anyone, would readily give them a free boat trip back to France but again the French won’t have it.

If the message got out that if you pay £4,000 to criminals for one of the most hazardous boat trips on offer chances are you will be sent back to France £4,000 lighter, then the lure of France as a conduit into the UK would be less. This could be a win win for the French if they stopped saying non non.