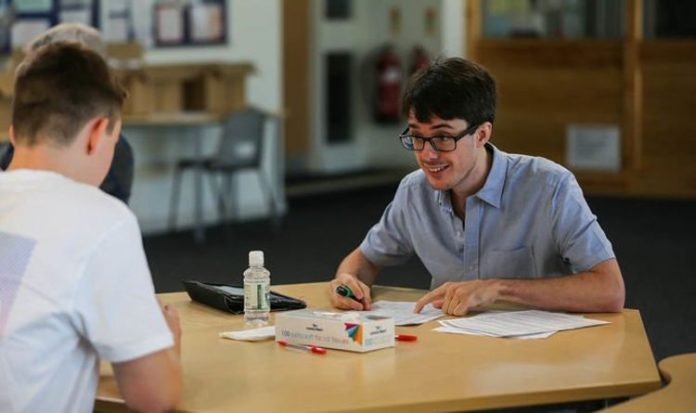 The under-pressure minister told MPs he would “trust in teachers rather than algorithms”, a reference to problems with last year’s exam results. He also confirmed there would be no Year 6 Sats tests at primary schools.

Mr Williamson, below, said it would be “mandatory” for schools to provide “high-quality remote education” of three to five hours every day.

He said Ofsted inspectors would check that this was being delivered.

Telling MPs that “our schools have not suddenly become unsafe”, he also said they are “much better prepared than last March” to implement home learning.

He added: “We have set out clear, legally binding requirements for schools to provide high-quality remote education.

“This is mandatory for all state-funded schools and will be enforced by Ofsted.

“We expect schools to provide between three and five hours teaching a day, depending on the child’s age.

“If parents feel their child’s school is not providing suitable remote education they should raise concerns first with the teacher or headteacher and, failing that, report the matter to Ofsted.”

He added: “I will not apologise for being enthusiastic to ensure we had been in a position to roll out exams – but we do recognise where we are as a result of this pandemic. We have to take a different course.”

He said the details of how teacher assessments would work were being “fine-tuned” with Ofsted, exam boards and unions.

Mr Williamson also announced that a national voucher scheme will be in place so all eligible children can access free school meals.

He told the House of Commons: “We are going to provide extra funding to support schools to provide food parcels or meals to eligible children.

“Where schools cannot offer food parcels or use local solutions, we will ensure a national voucher scheme is in place so every eligible child can access free school meals while their school remains closed.”

Labour’s Shadow Education Secretary Kate Green accused Mr Williamson of “chaos and confusion” – and claimed he had failed to listen to the “expertise of professionals on the front line”.

She said he had given a “cast-iron commitment” that exams would go ahead.

“At that moment we should’ve known they were doomed to be cancelled,” she said.

Last year’s attempts to find an alternative to exam results used an algorithm before descending into chaos.

It is up to schools and colleges to decide whether they continue with vocational exams, such as BTecs.

But college leaders have complained there needs to be a national decision to avoid confusion.

If students cannot take BTec exams this month, as planned, they will still be awarded a grade if they have “enough evidence to receive a certificate they need for progression”, said awarding body Pearson.

An Ofqual spokeswoman said it would consider options for replacing exams, academic and vocational, “to ensure the fairest possible outcome in the circumstances”.

“We are discussing alternative arrangements with the Department for Education. We know many are seeking clarity as soon as possible,” said Simon Lebus, Ofqual’s interim chief regulator.

Mr Williamson, whose daughter is one of tens of thousands of children unable to sit GCSE exams, has come under mounting pressure to resign over his handling of the schools’ crisis. But he was backed by Boris Johnson yesterday.

The Prime Minister’s press secretary told reporters Mr Williamson had produced a “full and comprehensive” package of measures for children who will be educated at home.

“It’s a huge brief and the Prime Minister believes the Education Secretary is doing it to his utmost ability,” she added.