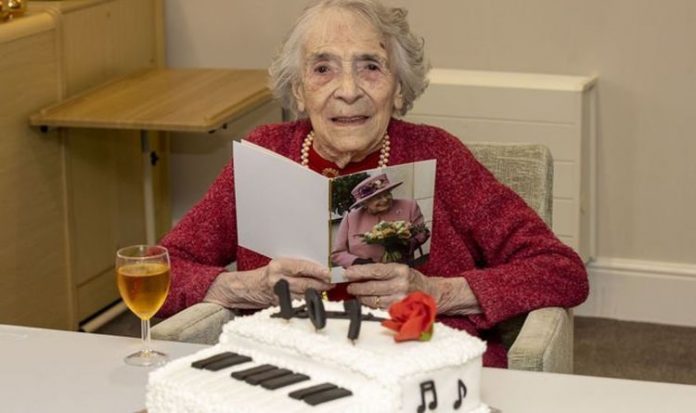 Joan with her birthday card from the Queen and her cake (Image: Steve Reigate)

Temperature checked, in protective equipment and at opposite ends of a table at the Willowcroft home near Derby, our exclusive pictures sum up the anguish of relatives still unable to hug, hold or kiss loved ones. But Graham was at least able to toast Joan’s big day and see her open a mountain of cards, including one from the Queen. In stark contrast, Joan’s daughter Stephanie, 72, had to wish her mother happy birthday in the pouring rain through an iron gate outside.

Like many of her peers Joan continues to struggle to understand why her family, including grandchildren Mark, 46, and Simon, 43, and great-granddaughter Freya, 18, cannot be at her side regularly.

But despite draconian restrictions due to what she calls the “plague”, the home pulled out all the stops.

Staff showered Joan with gifts including her favourite chocolates, flowers, perfume and a cake in the shape of a piano, the musical instrument she likes best.

Stephanie said: “Mum was in hospital at the start of lockdown but still living independently. My brother and I are in our 70s and had to be realistic.

Graham was allowed to see his mother for half an hour (Image: Steve Reigate)

“We were concerned that if she stayed at home she would have had carers coming in and out, which brings its own risks.

“Yes, it was upsetting not being able to be inside with Graham on Mum’s birthday, because I know she wants to see us all and us her.

“It’s extremely important this happens soon for the wellbeing, not just physically but mentally, for residents and their families.

“I don’t see why we cannot be regularly tested to allow us access.”

Joan, who left school at 14 to work at the John Player & Sons cigarette factory in Nottingham, survived scarlet fever, then Spanish flu in 1918, and remembers being a mother during the Second World War.

After Joan contracted Spanish flu her mother was told she would always have a seriously weak heart but she has defied the odds to become one of Britain’s oldest women.

Joan’s plumber husband Ralph died in 1996 and her sister Dora lived to be 100.

Stephanie said: “Sometimes she doesn’t know why things are the way they are. I hope there is a solution to this because very many families and their loved ones are suffering.”

Daughter Stephanie, 72, had to wish her mother happy birthday in the pouring rain (Image: Steve Reigate)

Graham said: “I would have loved to have held my mother on her birthday but Covid put paid to that.

“It was particularly hard because we just don’t know how many more birthdays she is going to have.

“But she had such a lovely time smiling and blowing kisses. Everyone at Willowcroft has been brilliant.”

Willowcroft admin manager Carly Theobald said: “We were so glad she had such a fantastic day.”

The Daily Express and its army of readers continues to call for care homes to be allowed to let loved ones in.

Graham, 76, was allowed inside her care home – for 30 minutes (Image: Steve Reigate)

We have laid bare the heartache of families since lockdown in March.

Prime Minister Boris Johnson this week described the situation as “absolutely wretched” and more than 165,000 people signed a petition by Jenny Morrison of campaign group Rights for Residents. Jenny said day in 1942 yesterday: “Those living in care homes continue to be locked away like prisoners. The silence from ministers is deafening.

“We want the Government to show compassion and find a way to urgently reunite families as many are simply giving up the will to live”.

Updated guidance says care homes in the Government’s medium COVID-19 alert system can develop a policy for limited visits and providers should carry out assessments.

Visits should be limited to a single constant visitor per resident where possible, with an “absolute maximum” of two.

But in high or very high risk areas, visiting should be limited to “exceptional circumstances only such as end of life”.