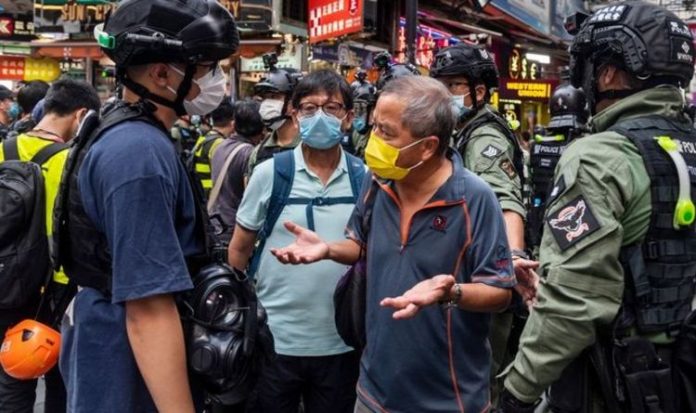 The Foreign Office has paved the way for almost three million people with British National Overseas (BNO) passports and their immediate family to come to the UK on a five-year visa which cost £250. The offer was made in July when Britain declared China had broken the terms of a 1984 handover treaty by imposing a new security law.

Applications open next January and the visas will allow Hong Kong BNOs to live, work and study in the UK and seek British citizenship once they have been in the country for more than five years.

A Home Office economic impact assessment found up to a million BNO status holders could file visa applications between 2021 and 2025 with as many as 500,000 moving to the UK in the first year alone.

READ  Businesses in England to receive £2.2 billion to see them through national restrictions

But a spokesman said the “central range” forecast suggested the actual numbers would be more like 153,700 in the first year and 322,400 over five years.

The spokesman said: “We should particularly take into account the effects of COVID-19 on travel and we do not yet know how that will affect people’s behaviour in taking up this offer.”

The impact assessment also suggested the influx would provide a boost to the economy of between £2.4bn and £2.9bn.

READ  Boris Johnson announcement: What time is Boris speaking and what could he say? | UK | News (Reports)

The Foreign Office said the visa offer was open to BNOs who are usually resident in Hong Kong and said it would provide a clear pathway to British citizenship.

Under the scheme, applicants will be able to sidestep the jobs, skills and income tests other migrants will face from January 1 2021.

But will not be eligible for benefits and will have to pay their own health surcharges and visa fees.

Conditions stipulate anyone moving from Hong Kong to Britain must have somewhere to live and be able to support themselves for at least six months as well as demonstrating a commitment to learning English.

Beijing had threatened to withdraw its recognition of BNO passports held by Hong Kong residents.

China does not recognise such passports as a valid document for mainland entry by residents of Hong Kong, which returned to Chinese rule in 1997.

Instead, it requires them to use travel permits issued by China.

BNO status was brought in under a 1987 British law that specifically relates to Hong Kong.