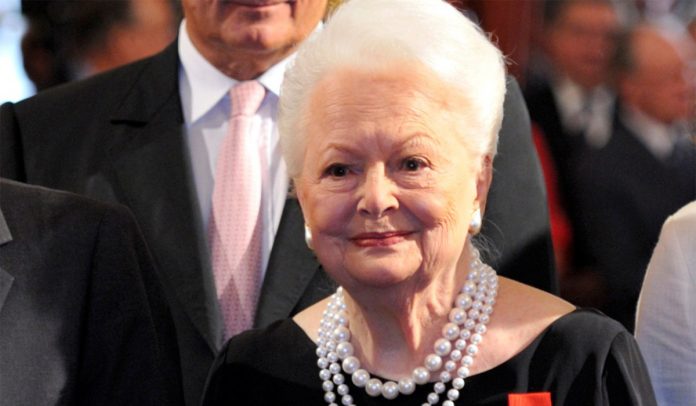 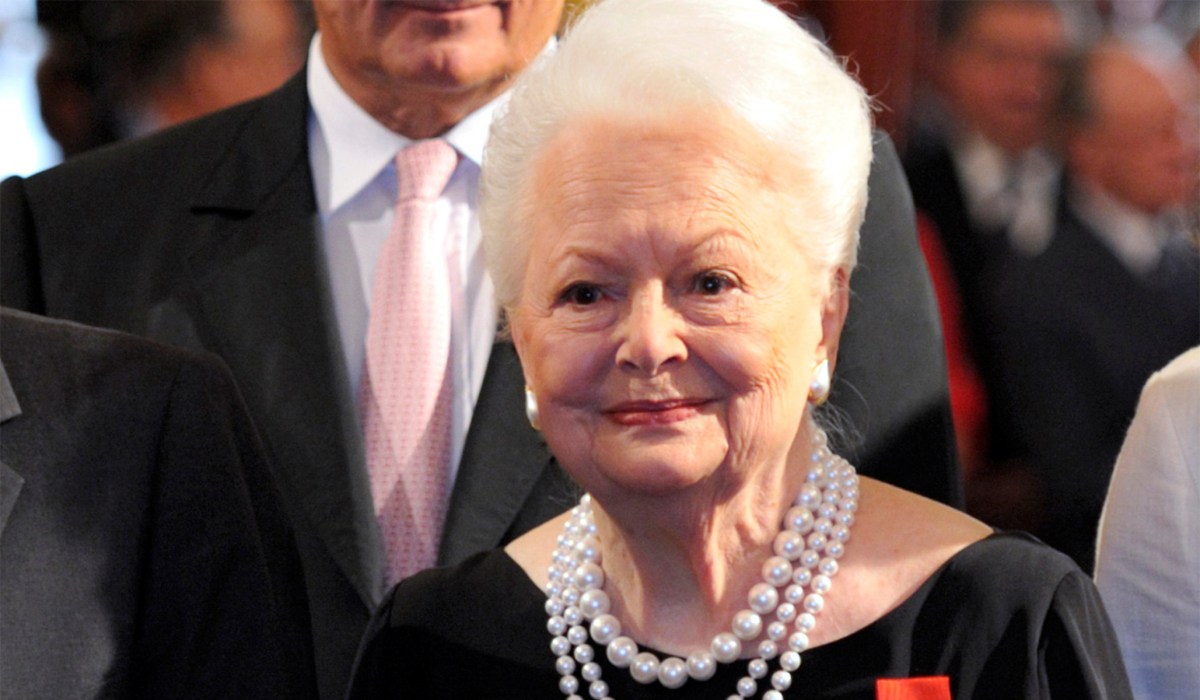 When Olivia de Havilland, the grande dame of the Golden Age of Hollywood, died last week at age 104, the tributes and memories for a life well lived poured in. She was the last surviving cast member of the epic Gone with the Wind. She won two Academy Awards. She was romantically pursued by everyone from Jimmy Stewart to Howard Hughes to a young Jack Kennedy. She challenged and helped change punitive film-industry practices toward performers.

But one chapter in her life was missing from almost all the tributes. In its 3,000-word obituary the New York Times failed to mention the role she played in defeating the Communist subversion of Hollywood in the 1940s.

The Washington Post devoted not one word of its 2,400-word obit to it. Neither did the Los Angeles Times, Hollywood’s local paper, in its 2,200-word sendoff.

But the story is a fascinating one and needs to be told even as it still makes many on the political left (for whom the Hollywood Blacklist is an honor roll) uncomfortable. While much of it has been recounted by others, I’ve been given exclusive new details from the diaries of a top FBI agent who worked with de Havilland to extricate her from a Communist front group and then to neutralize the group.

The broad strokes of the story have been admirably told by historian Ronald Radosh in his recent Wall Street Journal essay “De Havilland Saved Hollywood from Stalin.” Briefly, after meeting President Franklin Roosevelt at the White House in 1940 as a 24-year-old actress, she jumped at opportunities to support him. In 1944, she joined the pro-FDR Independent Citizens’ Committee of the Arts, Sciences and Professions, a group whose 3,000 members included Bette Davis, Gregory Peck, and Humphrey Bogart in its Hollywood chapter. “I thought, ‘I’ll join and try to be a good citizen,’” de Havilland, who had only become a U.S. citizen in 1941, told journalist John Meroney in a 2006 interview.

But in reality, the group was riddled with Communists.

Its leader, Hannah Dorner, was a secret member of the Communist Party. By October 1945, she was leading the Citizens’ Committee in opposing “the incipient native fascism” of the Truman administration.

In executive meetings of the Citizens’ Committee, de Havilland also found that the group wasn’t as independent as it publicly professed. It always sided with the Soviet Union even though the rank-and-file members were not Communist. “I thought, ‘If we reserve the right to criticize the American policies, why don’t we reserve the right to criticize Russia?’” she told Meroney. “I realized a nucleus of people was controlling the organization without a majority of the members of the board being aware of it. And I knew they had to be Communists.”

De Havilland also told Meroney that she felt betrayed that the Communists had used her, other celebrities, and New Deal liberalism as covers for their subversive work. She hadn’t been told that the Kremlin had declared in 1945 that Communism and capitalism could not coexist in the world and that war with the U.S. was inevitable.

Convinced she had a chance to recapture the Hollywood chapter from the Communists, de Havilland took the lead in gathering a small group of writers, actors, and producers at her home for meetings. Their goal was to fashion an anti-Communist declaration by the committee that would appear in newspapers and make the group’s independence clear.

She invited Ronald Reagan, with whom she had worked in 1940, in Santa Fe Trail. She was impressed with Reagan. “We told Ronnie what we were about,” she told Meroney. “And he volunteered to take on the writing of this declaration. He came back and read what he had written.” But de Havilland said she encouraged him to take an even tougher stand on Communism. “I said, ‘Ronnie, it’s not strong enough. It’s not strong enough. It has to be stronger than that or I won’t accept it,” she said.

When de Havilland tried to introduce Reagan’s revised declaration in July 1946, the Citizens Committee meeting that discussed it became “so heated and contentious that I thought, ‘This is it,’” she recalled. “I had fought long enough, and as hard as I could, and I resigned.” Reagan, James Roosevelt, and others from her dissident group soon followed her.

Dalton Trumbo, then Hollywood’s most famous screenwriter, denounced her efforts as nothing “but a denunciation of Communism” and “Red-baiting.” But she had the last laugh. As Meroney writes:

De Havilland succeeded at making a Communist-controlled organization irrelevant because without her, Reagan and other noncommunists in the forefront it lost its potency. Many in key positions in the organization, such as screenwriters Dalton Trumbo and John Howard Lawson, later publicly confessed to being Communists.

And Ronald Reagan went on to become the most implacable enemy Communism ever had. In 2004, on the occasion of his death, the Economist magazine put Reagan on its cover as “The Man Who Beat Communism.” Olivia de Havilland was both pleased with that and her role in mentoring Reagan.

De Havilland’s own recounting of this story is vivid and impressive. But scholars have noted that she is vague on the details of how she found out about the Communist infiltration of the Citizens’ Committee. Lloyd Billingsley, the author of Hollywood Party: How Communism Seduced the American Film Industry in the 1930s and 1940s, has wondered whether there might’ve been more to the rest of the story.

Last week, I got a note from economist Mark Skousen, a friend who runs the annual Freedom Fest in Los Angeles. He told me that his late uncle Cleon Skousen had left him a journal he had kept throughout his life, which included his time as police chief of Salt Lake City in the 1950s and as an FBI special agent in Los Angeles in the 1940s. A portion of the journal was devoted to the de Havilland story, but Skousen vowed that it would not be published until after her death. Cleon Skousen himself died in 2006 at the age of 93.

What follows is a section of his journal that has been edited for brevity and clarity. The full journal will be published in a forthcoming book that Mark Skousen and his wife, Joann, are editing: There Were Giants in the Land: Episodes in the Life of W. Cleon Skousen.

I was FBI liaison to the Hollywood studios (in 1946) and it was requested that I make contact with her and see if we could swing her away from the Communist group to which Olivia was contributing rather large contributions each month.

I made an appointment to visit her at the beautiful home she and her sister had in Hollywood, but like all of the stars, they had a very pretentious mansion in front but lived in a condo-type of apartment in the rear.

I told Olivia how impressed Director Hoover had been with her portrayal in Gone with the Wind, and he felt that if someone refreshed her mind on the great record of America in fighting for freedom, and how oppressive Communism had been, she might want to help our side. She immediately assured me that nothing would induce her to turn against her friends.

With her permission I gave her a 45-minute summary of the great obstacles America had overcome to raise up the first free people in modern times. She remained unconvinced and said she would remain with her friends who loved her. Nevertheless, she asked me to thank Mr. Hoover for his kindness and that was the end of the visit.

However, Olivia did not know that we already had a plant in the group and this undercover agent had made a recording of all their proceedings. I went back to headquarters and listened to these tapes and found that when Olivia was absent, they called her old “money bags” and schemed different ways to get her to contribute to certain causes for which she would be a “sucker.”

After making a 30-minute transcription of their insulting remarks, I took it back to Olivia and asked her to listen to it. I told her I would wait out on the porch until she had finished. She only listened to about five minutes and then came out on the porch swearing like a mule skinner. She said she would never go to their meetings again or send them any more money.

I told her there was one way she could get even with them. I suggested she make one more small donation and then furnish to us everything on how the Communist unions were planning to take over the studios.

She agreed to help the FBI as a double agent, and I sent a daily report on her information that was turned over to the Internal Security Committee of the Senate. The Communist plans for the takeover of Hollywood were broadcast coast to coast. I then suggested to Olivia that she tell the leaders of the party she wouldn’t give them another cent until they found out who the stool pigeon was that was leaking information to the Senate Internal Security Committee. They never guessed that it was her.

I worked with Olivia for some time, and we succeeded in getting her to help us root out the Communist takeover of the film industry.

Regardless of the details on just how Olivia de Havilland became the first major Hollywood liberal to call for ending the alliance between liberals and Communists and their fellow-travelers, many historians agree that it was an important moment. As Radosh notes:

She asked Hollywood actors to choose between being advocates for liberal democracy, and giving support to the Soviet Union’s line during the start of what became the Cold War. That effort deserves to be celebrated, and de Havilland praised for her courage and the integrity of her action.