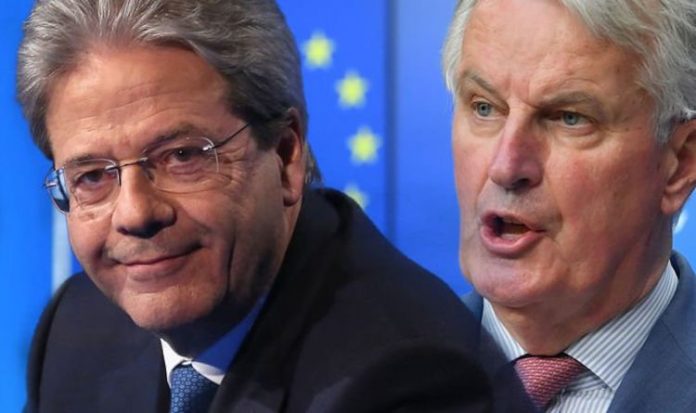 The EU’s chief Brexit negotiator Michel Barnier has claimed the next 36 hours of trade talks with the UK will be crucial. As he briefed EU ambassadors and members of the European Parliament, he made clear that the two sides have not yet overcome their divisions.He said Brussels and London need to assess by the end of this week whether there is a possibility to reach agreement, warning that key sticking points remain in the areas of “level playing field” conditions for business, EU fishing rights in UK waters and how any trade deal might be implemented.

Mr Barnier cautioned: “As issues stand, it is not possible to say if a deal will be there.”

The meeting was arranged after France and other EU members started raising serious doubts behind the scenes about the direction of talks.

In a sign of stoking internal divisions, diplomats were concerned that European Commission President Ursula von der Leyen, who is receiving daily updates on the talks, could be tempted to compromise too much to secure a deal.

One EU diplomat said Mr Barnier’s briefing “was mostly an exercise to calm nerves in Paris and elsewhere”.

Despite these recent claims, some EU member states are actually against the idea of not finding a compromise with Britain.

Italy has also called for the two sides to do “the right thing”.

After all, it was former Italian Prime Minister Paolo Gentiloni who famously broke ranks with EU hardliners in 2017, calling for a special, “tailor-made” Brexit trade deal.

In an interview in Rome on the first anniversary of his arrival at Palazzo Chigi, he said: “We need a tailor-made model for the relationship between the UK and the EU but the first move, in my opinion, has to come from the UK because the level of ambition needs to come from the side asking to leave.”

Mr Gentiloni’s emphasis on a bespoke model rather than an agreement following the precedent of previous trade deals contrasts with other EU officials.

At the time, Brussels had argued that the UK faced a choice between remaining within the bloc’s single market, like Norway, or pursuing a more goods-oriented trade agreement.

The former Italian Prime Minister added: “There can be models of reference based on deals the EU has with third countries but these were all done . . . building off a white sheet, tabula rasa . . .

“Here we are doing the opposite — removing things from a 40-year-old structure of extraordinary relationships — and this operation is objectively unprecedented and complicated.”

While all trade deals are adjusted to take account of the economies of participating countries, Mr Barnier had said the UK could not combine the benefits of the single market with the freedom to strike its own trade deals.

JUST IN: Brexit in name only fears as PM ‘likely to cave in to EU demands’

Italian officials cautioned that Mr Gentiloni was not trying to distance Italy from the mainstream EU position, but wanted to stress that there were many intermediate levels between the Norwegian and Canadian models.

This position was recently reinforced by Lee Rotherham, the former director of Special Projects at Vote Leave, who argued there are actually several options available to Brexit Britain that haven’t been considered.

Mr Rotherham said: “Brexiteers have been spending years trying to explain what no deal really is.

“The context is one of international defaults, in trade terms largely based on World Trade Organisation (WTO) terms’.

“But on top of that are the agreements the EU has reached multilaterally with other countries, and also bilaterally – as mini deals.”

Remainers have repeatedly claimed that a cliff edge awaits Britain because the EU will not sign such arrangements, despite both the precedent and “uncontentious nature” of many of them.

They have suggested that the UK could not possibly get an Australian-style deal because of these bolt-ons that turn WTO-only into WTO+ – and with genuinely friendly talks, possibly at least one more ‘+’ on top of that.

For further contextualisation, Mr Rotherham added, Kiribati has 32, Iran a like number, and Mongolia 47.

He continued: “The EU website has finally now put up a key page, listing the bilateral and multilateral agreements to which the EU and UK is a signatory.

“There are 286 such joint agreements in place between the UK and EU. Some no deal vacuum.”

Obviously, Mr Rotherham noted, many of these are relatively small beer, or largely irrelevant to negotiators’ prime areas of concern.

Moreover, a number relating to infra-EU arrangements will presumably fall when the transition period comes to an end.

However, even so, he wrote, the rest form an existing corpus of mini-deals that already go beyond WTO baselines.

He concluded in his piece for GlobalVision: “They show scope for third party cooperation, setting out principles that can be carried across. They include agreements with Israel and also the US over cooperation in Galileo, Conformity Agreements with the Swiss, and air links with Brazil.

“No deal is still today better than a bad deal. But even no deal if tackled head on is an area of unfenced opportunity.”