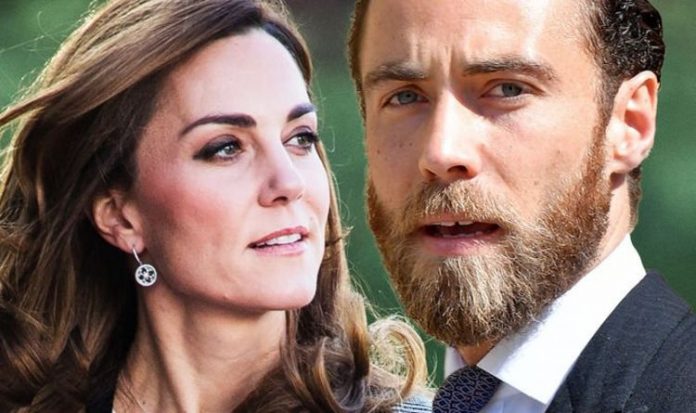 James, Kate Middleton’s youngest sibling, recently announced he was forced to postpone his wedding to Alizee Thevenet. It was the second time the couple have had to push back their marriage plans. The wedding had initially been scheduled for July, but then moved to later on in the summer.

The coronavirus pandemic, however, forced their hand once again in putting off the wedding.

Rarely is James in the news, with his sisters Kate and Pippa Middleton having had regular coverage.

Reports on Kate are naturally higher than the other two Middleton siblings considering her now being a deep-rooted part of the Royal Family and potential future Queen consort.

However, during a 2015 interview with The Young Director, James admitted the limelight being constantly on Kate does “frustrate” him.

When asked whether it was frustrating that his work is often overshadowed by Kate’s royal status, James said: “Yes, it does get frustrating.”

“I work incredibly hard—just like every other person in business and work,” he said.

“And aside from the fact of — yes, I am the brother of someone very important—I am, at the end of the day, just James.”

James has embarked on several business ventures that have received little attention.

The name – after his faithful dog Ella – was something close to James’ heart after he revealed how vital his dogs had been to him during his struggles with mental health.

Despite his frustration over being shadowed by his royal sibling, James has voiced his delight over being the “cool uncle” to three little royals.

In 2014, during an interview with ABC News, when asked whether he ever thinks about the fact he is the uncle of the future king of England, he made a touching confession about Prince George.

READ  Boris Johnson urged NOT to betray UK fishing by Thatcher minister: 'It's not about money!' | UK | News (Reports)

He said: “I still see Prince George as my nephew.

“I just want to be the best uncle possible.

“Like any uncle wants, I want to be the cool uncle, the fun uncle, the ‘watch me get this for them for Christmas’ or ‘how can we stand out?’ uncle.”

He added despite them all being busy with their own lives, the Middleton’s remained a “really close family”.

“We see each other and speak on the phone all the time,” he said.

“We’ll see each other for the odd Sunday lunch or pop in for a coffee.”