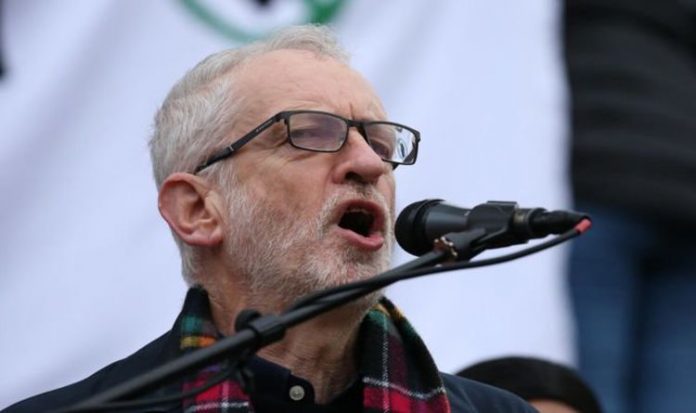 The former Labour leader joins two of his former shadow cabinet members John McDonnell and Richard Burgon in endorsing the record. The song written by British musician Robb Johnson pays tribute to the unique political life of the former Labour MP who represented the Bolsover constituency for 49 years.

The song about the lifelong socialist campaigner alludes to his stern principles on life and describes the former miner for over two decades as a man who “can’t be bought”.

Nicknamed the “Beast of Bolsover” the light-hearted tune also refers to Mr Skinner’s famous witty side and says he was no stranger to “making trouble” during his political career.

A verse of the song titled Tony Skinner’s Lad says: “And they wonder, what’s he after? Making trouble, what’s his game?

In the House of Commons, the Labour veteran became well-known for causing a stir and sending the Chamber into hysterics.

During the Queen’s Speech ceremony in 1992, the staunch republican shouted out “Tell her to pay her tax”.

In 2006, following the release of the film titled The Queen, Mr Skinner quipped “Have you got Helen Mirren on standby?”

In a post on social media, Mr Corbyn urged people to download the song before midnight on Thursday.

He wrote: “Let’s get the Dennis Skinner Single in the charts! Deadline for downloading is 11:59pm on Thursday.”

Musician Robb Johnson said he was inspired to write a song about Mr Skinner because he is “principled” and should be an inspiration to the current crop of Labour parliamentarians.

He said: “Dennis Skinner is the principled people’s delegate every Labour MP should aspire to be like.

“He’s also a lovely human being, and he likes a good sing and a good song too.

He said: “Dennis Skinner has served this seat with tremendous distinction. He has been a wonderful constituency MP and he has inspired millions of MPs.

“I’m very sad he can’t be here, because I haven’t found a street that I’ve walked up and down in this constituency where Dennis hasn’t helped somebody.

“Dennis, if you’re watching, I want you to know the love and affection of the people of Bolsover is very much still with you.”