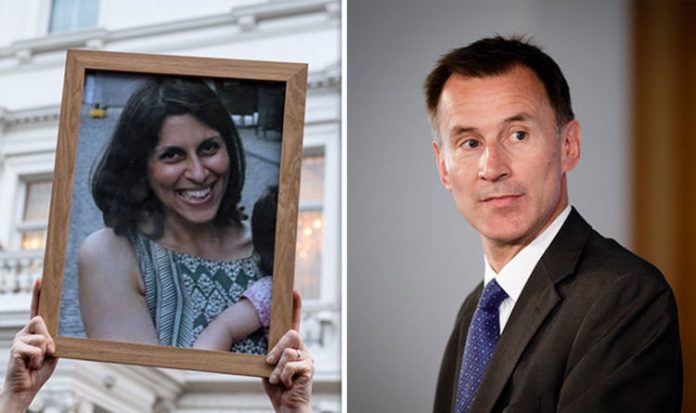 FOREIGN Secretary Jeremy Hunt yesterday reaffirmed his commitment to getting Nazanin Zaghari-Ratcliffe released from prison in Iran, after she was taken to the prison hospital when she suffered several panic attacks and passed out.

Mrs Zaghari-Ratcliffe was sentenced to five years imprisonment for spying in 2016, but maintains her innocence saying she was on holiday to introduce her daughter to her family in Iran.

She was given a three-day temporary release at the weekend and reunited with family, including four-year old Gabriella, but her application for an extension was denied and she returned to prison on Sunday night.

By Tuesday, she was having panic attacks, experiencing low blood pressure and speaking of headaches, a rash and numbness in her legs and right harm, according to husband Richard Ratcliffe.

Mr Hunt took to Twitter to say: “All our thoughts and prayers with Nazanin and her family today.

“Unbearable suffering to apart from daughter with her hopes raised then dashed.

“We must redouble efforts to find a way to get her home #FreeNazanin.”

Mr Ratcliffe has praised Mr Hunt in the past few days for his handling of the case, saying that he seemed to prioritise it more than his predecessor.

He said: “He’s been clear and critical and he’s said ‘listen, she’s innocent and she shouldn’t be in prison, her treatment has been appalling’ and all the things that we’ve been asking the Government to do.”

Mr Hunt’s predecessor Boris Johnson made attempts to free the former aid worker worse when he said to MPs Mrs Zaghari-Ratcliffe was “teaching people in journalism” when her central defence was that she never worked in Iran and does not train journalists.

After Mr Johnson’s comments she was taken to an unscheduled court hearing, where his words were cited as proof of her guilt and she faced new charges of spreading propaganda against Iran and threatened with an additional five years behind bars.

Mr Ratcliffe said the family, who were expecting the furlough to be extended, were “very, very worried” about Mrs Zaghari-Ratcliffe, a charity worker from Hemstead.

He said he had spoken to his wife on the phone and she was “devastated”.

Mr Ratcliffe said: “Clearly, her being back in prison has come as a huge shock for all of us but it was really hard hard. I spoke to her yesterday morning, she was really down.

“It was among the hardest phone calls I’ve had in the past two years with her.”

He added: “I think it feels like the symptoms of crushing disappointment since she went back into prison.”

He also said she was still in the prison clinic as far as he knew, despite reports that she had been taken to an external hospital.