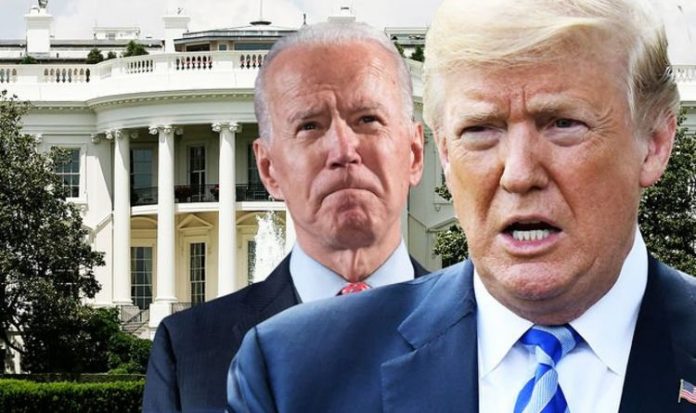 Joe Biden and the Democrats have sustained a comfortable lead in the polls throughout the election campaign as President Trump looks increasingly desperate. Mr Trump refused to commit to a peaceful transfer of power last month. When asked whether he would pass power to the Democrats without resistance, he said: “Well, we’ll have to see what happens. You know that.” He has also made an effort to cast doubt over the validity of the election, after saying in August that “the fraud and abuse will be an embarrassment to our country”. The President made a baseless claim that mail ballots may purposely be manipulated to be sent to Democratic areas and not Republican areas.

Expert in US politics, Professor Stephen Burman, believes Mr Trump could be plotting to spark a constitutional crisis in the country.

He told Express.co.uk: “Donald Trump has teams of people who are challenging the validity of the polls and are looking for opportunities to cast doubt on their validity.

“They will claim almost certainly, if he loses, that many of the mail-in votes are invalid.”

Professor Burman highlights how a legal challenge over votes could create a scenario where the Republicans lose the election, but still hand themselves power.

He explained: “If they challenge this, it has to go to the courts. This could go to the Supreme Court within a month, although this is unlikely.

“More likely, is that the legal cases go on and on, and when the Electoral College meets after the election, they usually agree to vote for the winner of that state from the election.

“But if nobody is declared the winner – and this could happen in a number of states – they are released from having to select a particular candidate.

“So if the Democrats win in a state, but it is still in dispute, then it falls to state legislators to choose representatives.

“Most of the state legislators are Republican, so they could give the election to Trump whatever the result of the election.”

The situation could become even more chaotic however, as Prof Burman tells Express.co.uk that governors in states could step in and challenge state legislators.

In this scenario, Vice President Mike Pence would controversially hand the Republicans victory.

READ MORE: Donald Trump poised to be replaced by someone ‘even more terrifying’

This unlikely but “plausible” scenario could result in a “constitutional crisis” in the US, leading to unsavoury scenes.

The expert in US politics said that previous protests show just how hostile the situation could become.

Prof Burman added: “If it happens, you can imagine the chaos.

“If it were to go the other way and Biden was winning, you would see militias on the street not accepting it.

“Once you say the election is invalid, once you cast doubt, it opens the gates to serious conflict.

“You can imagine there would be violence, guns, even deaths.”