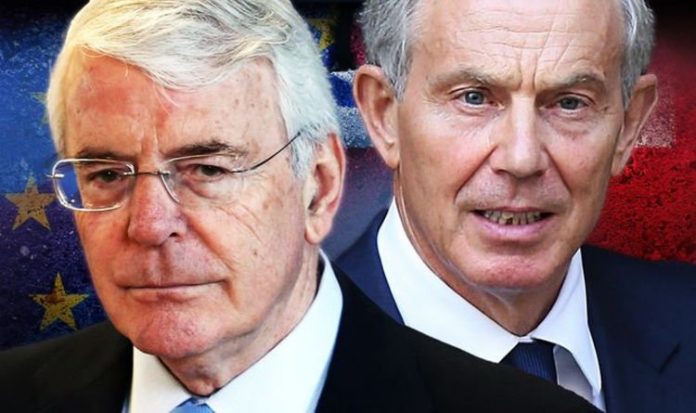 Tony Blair and Sir John Major have urged MPs to reject the “shameful” attempt to override parts of the Brexit Withdrawal Agreement. The two former Prime Ministers have accused the Government of “embarrassing” the UK by seeking the power to change the details of the treaty agreed with the EU last year. MPs will begin debating the contentious Internal Market Bill today.

A senior minister said the ex-Prime Ministers weren’t “close” to the process and the UK was in an unprecedented situation.

Writing in the Sunday Times, Sir John and Mr Blair said the Government’s actions were “irresponsible, wrong in principle and dangerous in practice”.

They added: “It raises questions that go far beyond the impact on Ireland, the peace process and negotiations for a trade deal – crucial though they are. It questions the very integrity of our nation.”

It is not the first time the two former leaders put their party allegiances aside to condemn Brexit and tried to stop Britain’s withdrawal from the bloc.

In a column for the Daily Express, political commentator Ross Clarke hit out at their “absurd double act”, analysing both political figures and their relationships with the EU.

He wrote: “John Major’s central case seemed to be that the Brexit vote was not a valid reflection of the will of the people because only 37 percent of those who were registered to vote in the referendum voted Leave, while 63 percent either voted Remain or did not vote at all.

“Trying to claim all non-voters as being on one side of the argument – yours – is pathetic.

“Funny enough I don’t recall Major making the same argument after the 1992 general election when only 32.7 percent of the registered electorate backed him and his party.

“Far from it, he insisted on staying in Downing Street until long after it became clear he had lost even the support of those who had voted for him.”

Mr Clarke also reminded readers that Sir John had once posed as a eurosceptic, criticising the EU for its blundering bureaucracy.

He then asked: “Surely then he would have had something to say about the incessantly negative and obstructive way in which the EU’s chief Brexit negotiator Michel Barnier has gone about his task?

“But no, Major didn’t say a word about this.”

Regarding the Conservative grandee’s suggestion Parliament should have had a free vote on the Brexit deal or a second Brexit referendum, the political commentator wrote in 2018: “It defies belief from a man who whipped the Maastricht Bill through Parliament and refused the public a say on it.

“Had the British people rejected Maastricht in 1993 – as I am sure they would have done given the chance – we would not be in the situation we are in today.

“The EU would have been forced to trim its megalomaniac ambitions and we might now be far happier members.”

About Mr Blair’s contributions to the Brexit debate, Mr Clarke described them as arguably “more absurd” than Sir John’s.

He explained: “Blair said that it is ‘sickening that people should be prepared to sacrifice the peace in Northern Ireland on the altar of Brexit’.

“No one is trying to sacrifice the peace and it is offensive of Blair to make this suggestion.

“But the EU is certainly stirring things unnecessarily by making a mountain out of a molehill over the Irish border.”

Mr Clarke added: “It is demonstrably untrue that there needs to be a hard border between an EU country and a non-EU country outside the customs union.

“Switzerland is outside the customs union, has its own trade deals with outside countries and yet still manages to be part of the Schengen area without hard borders with its neighbours.

“Exports and imports can be declared electronically. The Foreign Secretary was ridiculed for his comment about travel between London boroughs the other day but I have driven from France into Switzerland and it is just as easy as driving from Camden to Islington.

“But Blair has no interest in making this point.

“He wants to do whatever he can to frustrate the referendum result on Brexit.”