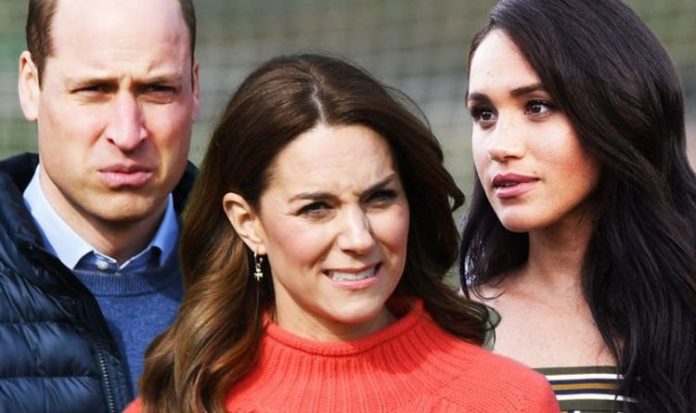 The Duchess of Cambridge, 38, and Prince William, 38, shared a photo of them with Prince Harry in 2017 to mark his birthday but royal fans questioned why Meghan Markle was not included. The Duke of Sussex, who celebrated his birthday in his new home following an eventful year, stepped down as a senior royal in March. Speaking on ITV’s Royal Rota, Chris Ship said: “To mark his birthday, they released some pictures to celebrate.”

“Buckingham Palace’s picture was taken at a reception in 2017 with Prince Harry and the Queen.

“Clarence Houses’s was taken in 2014 at the Invictus Games.

“Kensington Palace’s was also taken in 2017 and it was William, Harry and Kate doing a race for Heads Together.

“The photograph that Kensington Palace put up sparked a lot of debate as to ‘where is Meghan?’ when it was Harry’s birthday.

“But the Clarence House and Buckingham Palace images was just the Queen and Harry and just Charles and Harry.

“Should it have been just William and Harry? Does having Kate there pose more questions?”

But Kate and William’s official office has since been forced to deny any claims of a snub.

Commenting on the rare statement, Ms Robinson said: “Kensington Palace said people are reading too much into this and it’s just a nice photo.”

Harry and Meghan’s new life in America is progressing fast and the couple announced at the start of September they had signed a deal with Netflix to create films and programmes – estimated by an industry expert to be worth more than $250million (£190million).

The couple stepped down as working royals in March for financial and personal freedom and the lucrative contract has enabled them to pay back the £2.4million of taxpayers’ money used to renovate Frogmore Cottage, their UK home in the grounds of Windsor Castle.

A source has said they are no longer receiving financial support from the Prince of Wales and viewed the £2.4million payment as “another significant step in their new life”.

The couple previously took over funding for their own security when they quit as senior working royals.

Harry and Meghan have spent much of the lockdown supporting local charities in California or championing causes like gender politics and equality.

In the wake of the Black Lives Matter movement, the couple have spoken to young Commonwealth leaders and Harry raised the colonial background of the Commonwealth: “When you look across the Commonwealth, there is no way that we can move forward unless we acknowledge the past.

The duke and duchess were recently pictured at a preschool learning centre in Los Angeles helping youngsters replant their garden as they marked the 23rd anniversary of Diana, Princess of Wales’s death.