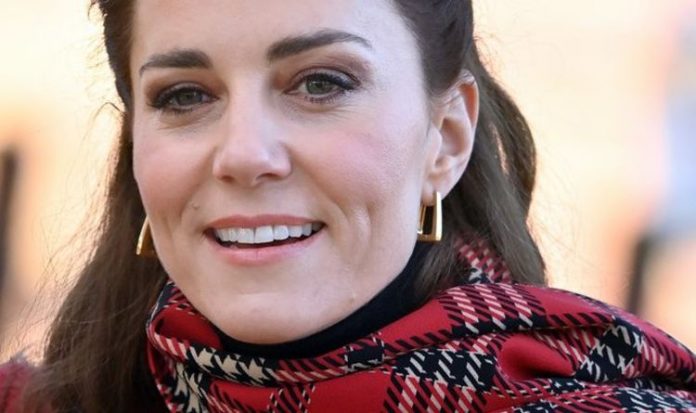 During the Royally Obsessed podcast, Rachel Bowie and Roberta Fiorito discussed the Duchess of Cambridge’s “fidgeting” during a Zoom call on Burns Night. Ms Bowie stated Kate’s hands looked awkward during the chat during the online royal engagement.

Ms Fiorito said: “I did feel that Kate seemed a touch nervous.

“Only because you and I are trained to kind of zero in on her hands and she was really gripping her thumbs in that Zoom call.”

Ms Bowie replied: “She was holding her fingers really weirdly, they were all interlaced but then it was really awkward.

“She was fidgeting a lot with her hands.”

Ms Bowie responded: “One of the things it points out is that she has probably watched her previous Zoom calls and how they look on social media, and she knows it is usually cut off at that point.

“This one was a little wider and maybe they aren’t used to it.

“She was definitely very fidgety which is interesting as it was a causal call.”

Ms Fiorito stated that she was scared when she saw bands playing at the engagements due to the level of “spit flying” as they played their instruments – amid the Covid pandemic.

She said: “I know there is a lot of criticism towards the Cambridges on this just in terms of the stage of the lockdown.

“I didn’t feel as scared except when we saw the band, then I was like ‘a lot of spit is flying’.”