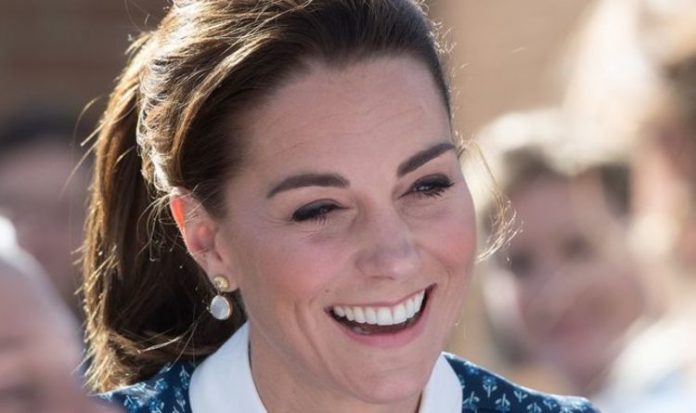 Kate, the Duchess of Cambridge and Prince William are the proud parents of Prince George, 7, Princess Charlotte, 5, and Prince Louis, 1. Royal fans have been recently sent into a frenzy after suggesting the Duchess has been showing signs of a new pregnancy but some body experts have been looking at the behaviour of the Duke for confirmation of the news. According to online magazine The Talko: “Some body language experts have been taking a closer look at the Duchess of Cambridge and she has been exhibiting a familiar tell.

“Often Kate rests her hands in front of her stomach, which can be an indication someone is expecting but there is just one more problem with this.

“Kate seems to prefer this stance and often holds herself like this regardless of whether she is pregnant or not.

“So, instead, body language expert Judi James took a look at Prince William and suggested he try not make a living as a poker player because she can see right through him.”

The report added: “According to Judi, lately William has been suppressing a smile that could indicate he’s holding on to some good news he isn’t quite ready to reveal just yet.”

Fans have also suggested Kate’s recent haircut is also a sign of an upcoming announcement based on the Duchess previously going for a new hairdo shortly before confirming she was pregnant with all three of her children.

READ  Appointment of Permanent Secretary to the Ministry of Justice

Royal expert Aranzazu Santos López told The Hits: “I have two clues that make me think Kate is pregnant.

“What are those clues? Look at these recent images of the return to school day. Look at Kate’s hair. It has a different air.”

However, the Duchess previously suggested she was open to the idea of welcoming a fourth child into her brood but admitted she was not sure how William would react.

Kate told the “Happy Mum, Happy Baby” podcast: “It was through hyperemesis that I really realised the power of the mind over the body because I really had to try everything and everything to try and help me through it.”

She continued: “I saw the power of it really, the meditation and the deep breathing and things like that – that they teach you in hypnobirthing – when I was really sick and actually I realised that this was something I could take control of, I suppose, during labour.

“It was hugely powerful and because it had been so bad during pregnancy, I actually really quite liked labour!”

But despite the concerns expressed about Kate’s health, bookies have suggested news of a new royal baby may be imminent.