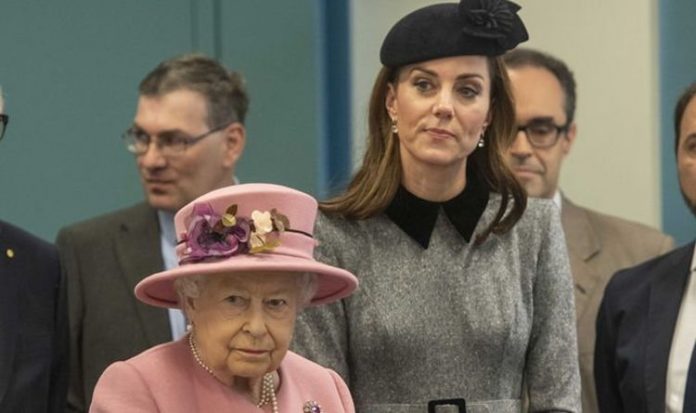 Duncan Larcombe, royal expert, claimed the Duchess and monarch talk regularly about royal and personal matters. His comments follow reports which held the Queen felt Kate did “very little” when she first began dating Prince William, and believed was not the right fit for the Royal Family.

Mr Larcombe claimed the Queen approaches Kate for advice on issues, and always asks about the Cambridge royal’s children.

He said: “Kate has her own direct line to speak to the Queen and she calls her to check in on her and give her updates on the children.

“She always leans on her for advice. It’s believed Kate was the one to teach the Queen how to use Zoom and that’s been lovely, so she can see her great-grandkids and stay connected.”

The expert added the Duchess “strikes that balance between bowing to her as head of the royal family in public but being able to check in with her as the great-grandmother to her children”.

It follows Phil Dampier, royal expert, telling Express.co.uk the Queen was not always fond of Kate.

He said: “Kate was William’s girlfriend for eight or nine years before they got engaged and got married.

“There was a phase where she appeared to be doing very little really.

“The Queen once remarked Kate doesn’t do very much so I think she had a fairly long entrance to the Royal family.”

Both the Queen and Kate have carried out joint royal engagements since she married William.

The Queen said: “The Duchess of Cambridge and I were inspired to see how the photographs have captured the resilience of the British people at such a challenging time, whether that is through celebrating frontline workers, recognising community spirit or showing the efforts of individuals supporting those in need.”

READ  Promoting international criminal justice and the rule of law