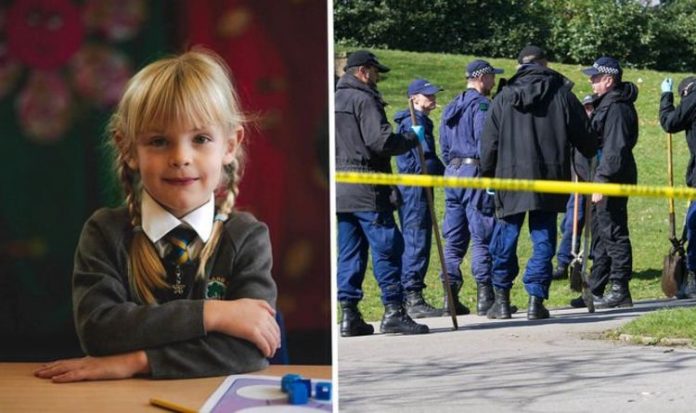 After hearing from her forensic psychiatrist at high security Rampton hospital, Notts, the Crown yesterday withdrew the murder charge and the jury returned a not guilty verdict. Skana will be sentenced for manslaughter at Manchester’s Minshull Street Crown Court on Tuesday. Emily was with her father riding her scooter through Queen’s Park in Bolton last March, when she spotted her mother Sarah Barnes jogging.

Prosecutor Michael Brady QC said Emily called out to her mother and scooted towards her but “also in the park was Eltiona Skana – she was alone on a bench armed with a craft knife”.

Mr Brady said: “Emily’s path to her mum took her past the defendant, who grabbed her and in one movement slit her throat and threw her to the ground. The wound was unsurvivable.”

Skana, from Albania, fled but was later detained under the Mental Health Act.

Prosecutors said Skana later told a nurse she had targeted Emily, but the court was told the conversation took place when Skana was not taking her anti-psychotic medication.

The court heard that when police raided her Bolton flat they found about a month’s worth of untaken drugs.

Skana had been admitted to psychiatric hospitals three times, the court was told. Her Rampton consultant, Dr Syed Afghan, agreed Skana became psychotically violent when not taking her medication.

A Crown Prosecution Service spokeswoman said of the decision to withdraw the murder charge: “We met with Emily’s family earlier today to explain the reasons for our decision.

“This is a very tragic case and all our thoughts are with them at this time.”