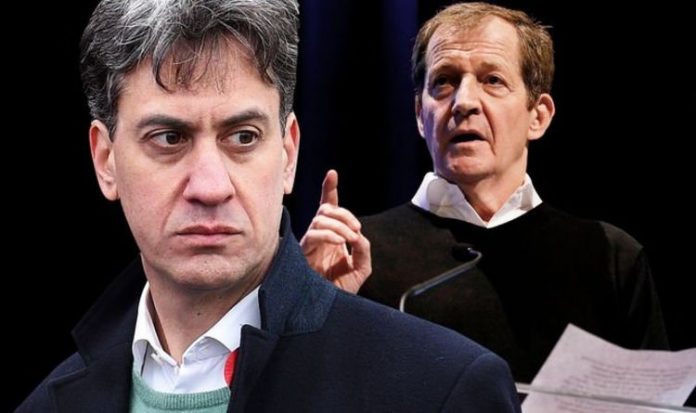 A video of Mr Miliband, the Labour Party’s shadow business secretary, accusing Mr Johnson of seeking to “get Brexit undone” in the House of Commons has gone viral. His energy was largely targeted during discussions surrounding the controversial UK Internal Market Bill. The former Labour leader warned MPs that passing the legislation would “equip the government with the power to break the law” and was a matter of “right versus wrong” rather than “Leave versus Remain”.

The segment being shared on social media is not the full 25-minute-long video, but a clip which focuses on Mr Miliband’s direct attack on the prime minister sitting just a few feet away.

Mr Miliband has in recent months taken a more central role in Labour, after having lost the 2015 election to Conservative Party and David Cameron, shortly then resigning to the backbenches under Jeremy Corbyn.

Mr Miliband largely supported Mr Corbyn in his leadership endeavours and has previously said that many of Mr Corbyn’s policies were similar to his own.

But, he found himself at loggerheads with Labour’s former spin doctor and mastermind behind the New Labour movement, Alastair Campbell, during a 2018 GQ interview.

Labour Party: Ed Miliband and Alastair Campbell were entangled in a bitter exchange over the party (Image: GETTY)

Mr Campbell was publicly averse to Mr Corbyn, and was famously expelled from the party after admitting he voted for the Liberal Democrats in the 2019 European Parliament election live on TV.

Mr Miliband and Mr Campbell disagreed on how well oiled Mr Corbyn’s machine was, as Mr Miliband said: “This is why I give some credit to Jeremy Corbyn.

“I think this is a moment when people want big answers, bolder answers, to the problems that exist.

“I always felt this while I was leader – I felt that my analysis was big, but are the answers enough?”

Mr Campbell replied: “Yes but, what is the boldness? I don’t sense a boldness in what the Labour Party are doing.

“I sense a regression and going back to some old-fashioned things,” here Mr Miliband interjected and began to list several modern policies Mr Corbyn had proposed including abolishing university tuition fees.

Mr Campbell said: “Ok, there’s lots of things in that manifesto that people would like, but can they pay for it? I thought this idea that the manifesto was fully costed is a brilliant piece of spin.”

Mr Miliband shot back: “And you might be in a good position to judge. What makes you say that?”

Mr Miliband asked what made Mr Campbell think the manifesto wasn’t costed, adding the fact that the party published a list outlining how they would pay for the policies.

Mr Campbell replied: “Yes, but I just don’t believe that actually added up to a coherent plan.”

Mr Miliband replied: “I’m not sure I agree with that, no, I don’t think so.”

Mr Corbyn and Labour ran on a manifesto that almost exactly resembled the 2017 election pledges.

Many experts argue that this, added to the issue and Brexit and anti-Semitism, led to the party’s eventual downfall.

Before Mr Miliband was picked by Labour’s new leader, Sir Keir Starmer, in April during his cabinet reshuffle, he had focused on his Doncaster North constituency, as well as his new podcast ‘Reasons to be Cheerful’.

He co-presented it with broadcaster Geoff Lloyd, concentrating on ideas on how to “fix the world” with notable guests.

In response to Mr Miliband’s – as well as others – criticism of the withdrawal agreement changes, Mr Johnson said British law needs to preserve the arrangement on which “so many jobs and livelihoods depend” as the transition period nears its end.

He added: “That is the fundamental purpose of this Bill, which should be welcomed by everyone who cares about the sovereignty and integrity of our United Kingdom.”

“When we renegotiated our WA from the EU, we struck a careful balance to reflect Northern Ireland’s integral place in our United Kingdom, while preserving an open border with Ireland, with the express and paramount aim of protecting the Belfast Good Friday Agreement and the peace process.

Boris Johnson: The PM is currently defending his proposed amendments to the Brexit bill (Image: GETTY)

“And in good faith, we accepted certain obligations in the Northern Ireland Protocol in order to give our European friends the assurances they sought on the integrity of their single market.”

The move a row within Mr Johnson’s party and across the political spectrum.

The ballot, however, cleared the first hurdle, having passed with a majority of 77, with 340 votes to 263.