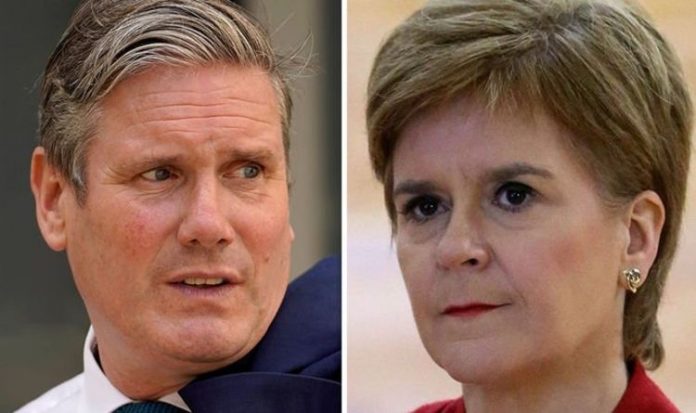 Former Labour MP for Glasgow South, Tom Harris, has argued that his ex-party’s “continuing capitulation to nationalism is an inevitable response to a succession of increasingly humiliating electoral defeats” that have plagued the Scottish Labour Party in the past decade. Mr Harris, who quit Labour in 2018, believes that his old party has seen how well the Scottish National Party’s (SNP) rise in Holyrood has been over independence, that they seem to have followed a similar line in recent debates. Writing for Conservative Home in a piece titled ‘Scottish Labour’s continuing capitulation to nationalism reeks of political desperation’, Mr Harris examined Wednesday’s session in the Scottish Parliament, which saw discussions rage over the UK single market.

He said: “SNP ministers, for perfectly understandable reasons, don’t like the idea of a single market in the UK, despite our having enjoyed the benefits of one since 1707.

“About 60 percent of all Scotland’s exports are destined for markets in the rest of the UK, far outweighing the importance of the EU single market.

“Yet the nationalists have consistently prioritised, in a political sense, the EU single market over the UK because…well, because it suits them. Scottish nationalism has thrived by emphasising Scotland’s links with Europe and diminishing its historical, economic and social ties to the rest of the country.”

Historically, Labour has campaigned for Scotland to remain in the UK, with it backing the triumphant ‘No’ side of the 2014 referendum on independence.

Following the UK’s withdrawal from the EU, the SNP – fronted by its vocal leader Nicola Sturgeon – have secured landslide victories in elections with their vow to have a second referendum on their place in the union.

The former Shadow Minister for the Environment continued: “The SNP is so opposed to the British state that it would rather have Scottish fishing policy decided in Brussels than in Edinburgh. Labour follows this line.

“Likewise, nationalists would prefer Scotland’s trade policy to be decided in Brussels than in London, the former being trusted to produce a marvellous and, no doubt, progressive, deal while one negotiated by those evil Tories in London would necessitate customs checks at Gretna. Again, Labour is happy to parrot this propaganda too.”

As Westminster continues to refuse Ms Sturgeon’s pleas, support for her independence mandate continues to grow, with a recent Panelbase survey suggesting that were a referendum to be held today, 55 percent of voters would support leaving the UK.

After the 2019 general election, in which the SNP won comfortably in Scotland, Ms Sturgeon formally requested powers from Westminster to hold a second independence referendum – but the notion was firmly rejected by the Prime Minister.

Support for Scottish independence has shifted hugely in recent months, with a landmark poll by Panelbase showing that a referendum today would see 55 percent of voters back leaving the UK.