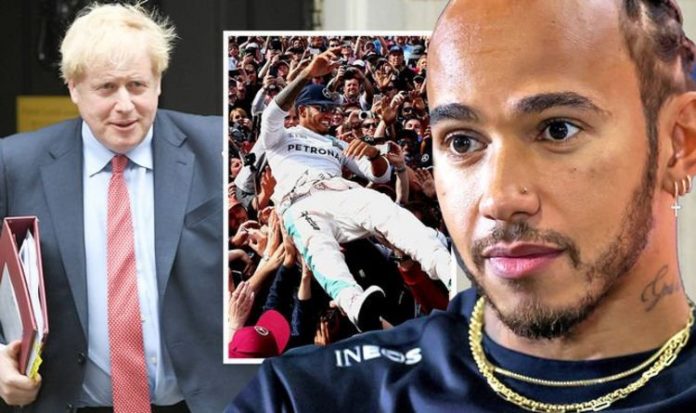 The Mercedes driver tested positive for coronavirus this week, and will therefore miss the Sakhir Grand Prix in Bahrain this weekend. Lewis Hamilton emerged victorious at the same track just last Sunday, but his team will now have to select a replacement driver. The Briton has already wrapped up his seventh world title, putting him level with Michael Schumacher. However, the coronavirus pandemic has led to Mr Hamilton piling increasing pressure on leaders in the UK – including Prime Minister Boris Johnson.

The world champion has been critical of the UK’s response, including in June when he said he was “appalled” by the handling of the crisis.

He made the claims in an Instagram story, which meant it only stayed online for 24 hours.

Mr Hamilton said in the post: “I’m appalled at the UK government on how they have handled Covid.

“You should have closed the boarders [sic] two months ago. How you can let people fly in from countries without being tested is baffling.

“You could have saved thousands of lives. We need better leaders!”

Despite the criticism, Mr Hamilton’s achievements on the track over the last decade have finally seen him added to the honours list this year by Mr Johnson.

Mr Hamilton reacted to the news, saying: “When I think about being knighted, I think of people like my grandad who served in the war. And Captain Tom, who waited 100 years.

“Then you have these doctors and nurses who are saving lives at this hardest time ever. I don’t look at myself as an unsung hero. I haven’t saved anybody.”

The Formula One star has inspired many with his campaigning in support of Black Lives Matter recently.

Lord Hain told Express.co.uk: “It’s been inspiring first of all because it is unusual for sports stars of his stature to speak out in this way, and to do so not in a political party sense but to take on the Government.

“He won the first time round, and I suspect during the winter there will be another arrangement.”