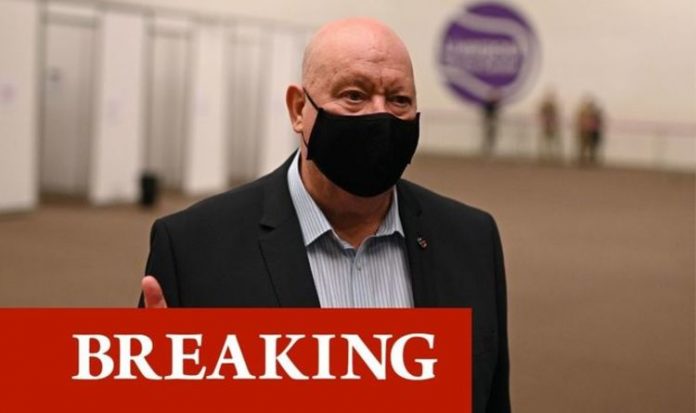 His decision comes after he was arrested in connection with offences of bribery and witness intimidation as part of an investigation into building and development contracts in the city. In a statement released today, Mr Anderson said he was “stepping away from decision-making within the council” until the police “make clear their intentions with the investigation on December 31”.

He said: “I have always done what I believe is best for the city, and I am taking the following action with those best intentions in mind.

“It is important that everyone in Liverpool knows that our leaders are focussed on what is most important to the people; their livelihoods and, with a pandemic still in force, their lives.

“For this reason, I believe it is important that the city, and government, are reassured that our city is indeed operating in the correct way.

“I am, therefore, stepping away from decision-making within the council through a period of unpaid leave, until the police make clear their intentions with the investigation on the 31st December.”

Wendy Simon will stand in as acting Mayor.

Mr Anderson was released on bail after being arrested with four other people.

The 62-year-old, who lives in the Old Swan district of the city, was arrested on Friday and taken to a police station for questioning.

Merseyside Police said in a statement on Saturday: “We can confirm that five people arrested in connection with offences of bribery and witness intimidation as part of an investigation on into building and development contracts in Liverpool have been released on conditional bail, pending further inquiries.”

Sources later confirmed that he had been suspended from the Labour Party following his arrest on suspicion of conspiracy to commit bribery and witness intimidation.

Mr Anderson said the arrest was a “painful shock”.

He said: “The arrest on Friday has also been a painful shock for me and my family, following a difficult few months. I need to focus on their future and returning to a normal they can recognise, with the reassurance that I am no longer under suspicion.

“Therefore I am going to focus on co-operating with the police in their ongoing inquiry, as I believe time will make it clear that I have no case to answer.

This situation has not dampened my passion for our city and the inspiring people who live and work here, most particularly the dedicated public servants who work within the Council and the Cabinet. They will continue their incredible work, as we would expect, against the challenging circumstances we find ourselves in.

“But I am not prepared to contribute my own circumstances to those challenges, so I have reached this decision for that reason alone.

“I am very grateful for the many messages of support I have received and I have faith that, as always, the future of our city is bright and its best days are ahead.”

Liverpool City Council said in a statement on Friday that it was co-operating with Merseyside Police “in relation to its ongoing investigation” but would not comment on “matters relating to individuals”.

Mr Anderson was elected mayor of Liverpool in 2012, having been on the council since 1998.

The father-of-four was in the Merchant Navy and worked as a social worker before taking up the role.

He stood to become the Labour candidate for metro mayor of the Liverpool City Region in 2016 but was beaten by the then Walton MP Steve Rotheram, who currently holds the post.