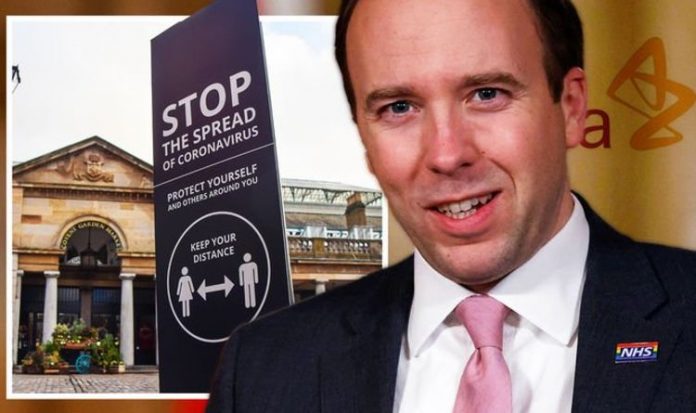 Lockdown rules were rolled out across the country last March in a bid to drive down the infection rate for coronavirus and protect the NHS from being overwhelmed. Since then, two more lockdowns have been imposed on the nation, along with a raft of restrictions, leaving millions of people holed up inside and told to stay home. Across Britain, lockdowns are due to end from February 19 in Wales but will remain in place until at least March 8 in England. But in the wake of new research, the end of lockdown may happen sooner than one might expect.

Currently, people must remain at home and only leave their homes for essential reasons such as seeking medical help, escaping injury or harm, to work or to move house.

Those who breach these rules may face fines of up to £10,000 depending on the circumstances.

Prime Minister Boris Johnson first announced the lockdown in England at the beginning of January and suggested mid-February would mark the point at which lockdown easing would begin.

However, last week, he pushed this date back, revealing schools will not be permitted to open until at least March 8.

Speaking from the House of Commons, the Prime Minister said: “So our plan for leaving the lockdown will set out our approach towards reopening schools.

“If we achieve our target of vaccinating everyone in the four most vulnerable groups with their first dose by February 15 and every passing day sees more progress towards that goal, then those groups will have developed immunity from the virus by about three weeks later, that is by March 8.

“We hope it will therefore be safe to commence the reopening of schools from Monday, March 8, with other economic and social restrictions being removed thereafter as and when the data permits – then or thereafter, I should say, Mr Speaker.”

As of February 1, some 9,646,715 people have received the first dose of the vaccine – with just shy of half a million having also had their second jab.

With a UK population of some 66 million people, however, we’re still a long way off from total vaccination – but a new study has sparked hope.

New research concerning the Oxford-AstraZeneca vaccine has shown the jab to offer about 75 percent protection against Covid-19.

A single dose of the Oxford-AstraZeneca vaccine prevents two-thirds of Covid transmissions according to the new results, raising hopes for the easing of restrictions by Easter.

All over 50’s are expected to have bee vaccinated by the spring. There are approximately 21,893,700 people in the UK over 50-years-old, according to the 2011 census – equivalent to 34 percent of the population.

But there are 26,192,100 people aged between 18 and 49 – some 41 percent of the population. And as yet it’s unclear how much of the population needs to be vaccinated for restrictions to be eased.

However, the news has come as a relief for many with Health Secretary Matt Hancock hailing the results as “absolutely superb”.

These results represent the first instance in which a Covid vaccine has been shown to reduce the spread of the virus.

The data found the first dose of the Oxford-AstraZeneca vaccine prevented 100 percent of hospitalisations after 22 days once an immune response has time to develop.

The new research was published as the number of vaccinations undertaken in the UK surpassed 10 million vaccine doses.

This means the country has 12 days to reach its target of 15 million, which covers the top four priority groups devised by the Joint Committee on Vaccinations and Immunisation.

A Whitehall source told the Telegraph: “These findings are exactly what we need.

“The finding on hospitalisations is particularly significant. At the moment, we have got restrictions in place to stop people dying and to prevent the NHS keeling over.

“Once you have protected these groups, even if there is some transmission it’s a manageable problem — so we don’t need the restrictions.

READ MORE: POLL: Should Boris fast-track the end of the UK lockdown?

There has been growing anger and resistance among Conservative Party MPs about the decision to keep English schools shut until at least March 8.

Prominent Tories demanded to know what is “holding us back” in England.

Many Tory MPs are calling for an urgent House of Commons debate about reopening schools levying more pressure on Mr Johnson after Scotland announced a phased return of primary school pupils starting from February 22.

A total of 27 Tories are now backing a campaign by parents group UsforThem, which is calling for the Government to reopen schools or publish a cost-benefit analysis on the continued closure of schools.