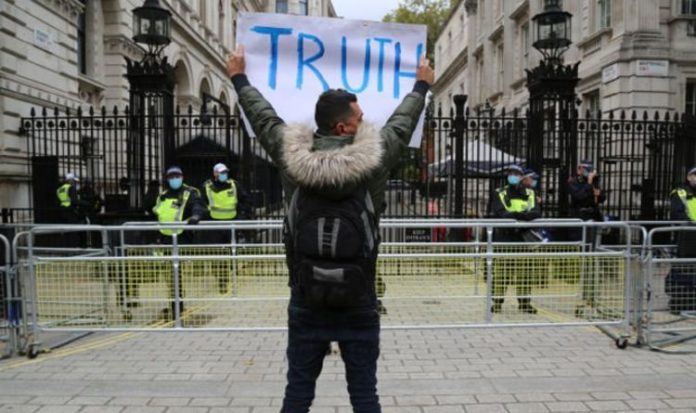 Police lined the streets as people marched with banners declaring the virus a hoax. Others read “I will not vaccinate” and “martial law coming, think it’s still about health?” The protestors were mostly unmasked as they made their way through central London.  The group included Piers Corbyn, brother to the former Labour leader Jeremy Corbyn, who has previously been fined £10,000 for organising a rally.

A man dressed as a clown spoke out against local lockdowns.

One man, wearing a hi-vis jacket was filmed telling people to stay in groups of six “or they would be punished”.

Members of the protest told each other not to “give him any oxygen” and keep walking, as he made fun of the demonstration.

It is not the first anti-lockdown protest to take place — at the end of September, 16 people were arrested and nine officers injured following clashes in London.

Thousands of people gathered in Trafalgar Square as part of a “we do not consent” rally.

The latest demonstration comes as the Prime Minister is poised to announce tougher lockdown restrictions on Monday, with pubs and restaurants across northern England widely expected to be told to shut.

A 10pm curfew on hospitality venues has been in place across the whole of England, Wales and Scotland for just over two weeks.

Boris Johnson will reveal the full details of a new streamlined lockdown system in a statement to the House of Commons.

It could mean one in five of all English pubs closes temporarily.

Evidence presented to MPs by England’s chief medical officer has suggested 30 percent of infections are coming through hospitality.

Steve Rotheram, mayor of the Liverpool city region, told Sky News he had been told the area would be placed under Tier 3 measures, the most restrictive form, from next Wednesday and that he was seeking more details from the Government.

Leaders across northern England have urged the government to provide more cash to support areas which face tighter restrictions, or risk “levelling down” the region.

Greater Manchester Mayor Andy Burnham said that accepting Chancellor Rishi Sunak’s financial package would be to “surrender” people to hardship in the run-up to Christmas.

In Scotland, until October 25, pubs, bars and restaurants will be closed in five health board areas – Greater Glasgow and Clyde, Lanarkshire, Forth Valley, Lothian and Ayrshire and Arran – affecting more than three million people.

These venues can offer a takeaway service and cafes within the central belt are allowed to stay open during the day but cannot serve alcohol.