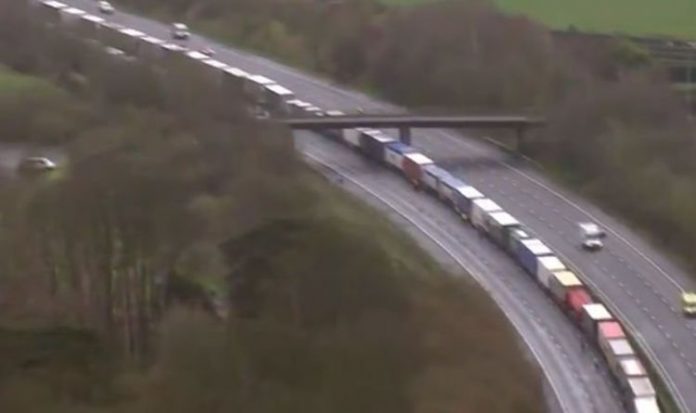 Hundreds of truck drivers stuck in a lorry park near Dover have been left without water and the only toilet has been blocked, according to a fellow driver delivering supplies to them. More than 2,800 lorries are backed up in Kent, while the Port of Dover and Eurotunnel remain closed to traffic leaving the country, with drivers facing a third night sleeping in their cabs. Freight unable to make the crossing to France have been told to go to Manston Airport, near Ramsgate, which is now being used as a lorry park.

Laszlo Baliga, 51, from London, who is a truck driver himself, spent Tuesday delivering food and water to those lined up in the disused airfield.

He began taking supplies after Hungarian drivers stranded in the lorry park posted on Facebook asking for help, with one driver telling him the only toilet on the site had been blocked.

He said: “No water and no toilet now – there is one toilet, but it is now blocked.”

He and friends have so far spent more than £500 on food and water for drivers at the site.

The Government said there was “more than adequate health and welfare provisions” available for hauliers.

Delivering bottles of water, Mr Baliga said: “This is our third time, we have got ready-to-eat sausages, bread, tomatoes, lettuce, coffee. Basic foods for now for the drivers.

“When we see Hungarian drivers coming in we say stop, and the drivers take things in to the other side to give to everybody.”

He added: “We like to help because this is a difficult time.”

He called for public toilets to be opened for drivers and tea and coffee for those stranded.

He added: “Myself, I am in a warm hotel, I have enough food for the next two weeks, but I see a lot of people who have big problems staying more than one night.

“People are already staying a second night in their car, it’s just not a life. I ask the British Government to please help, and help immediately.

“I do not see there is much help from the Government, the British Government or the Belgium government, which just says wait, and how long it should be is the question.”