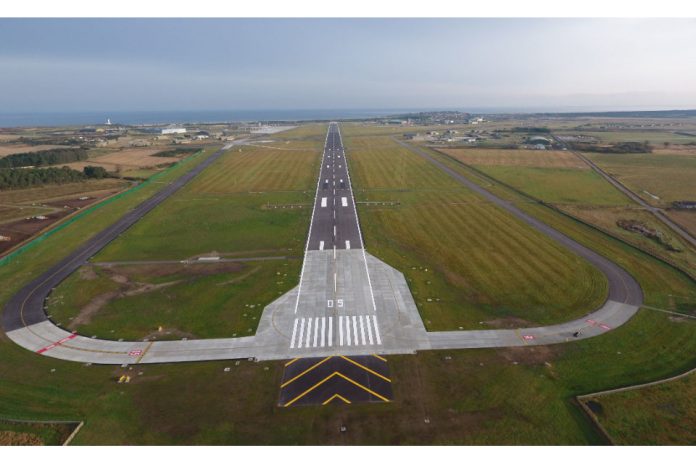 The Defence Infrastructure Organisation (DIO) awarded a £75-million contract for the airfield operating surfaces project to VolkerFitzpatrick in August 2019. The project was expected to be completed in spring 2021 but fast work allowed the runway to be handed over to RAF Lossiemouth on 15 December 2020, following successful completion of pre-use checks.

Resurfacing works are one of many improvements being made at RAF Lossiemouth, future-proofing the Moray base for years to come. Other improvements include accommodation for personnel, a new Air Traffic Control Tower, upgrades to drainage and electrical supplies, and upgraded facilities for IX (Bomber) Squadron.

For most of the runway work, which started in earnest in January 2020, aircraft continued to operate from RAF Lossiemouth. This work required the RAF’s new P-8A Maritime Patrol Aircraft being delivered to nearby Kinloss Barracks and operating from there during the majority of the runway works. A short period of relocation was also needed for Lossiemouth’s Typhoon aircraft while the intersection between the Station’s two runways was resurfaced; this started in August 2020 and saw the Typhoons also operating from Kinloss Barracks as well as Leuchars Station. The intersection resurfacing finished in October 2020, allowing the P-8As and Typhoons to return and operate from their home station.

The P-8A Poseidon is a submarine hunter which locates and tracks potentially hostile submarines. Home to four fast-jet squadrons flying the Typhoon, it has been some time since RAF Lossiemouth has regularly operated a larger aircraft such as the P-8A Poseidon. The P-8As represent a new era in operations from this station and a significant investment in Scotland which introduces a new UK Defence capability.

The completion of the runway works months ahead of schedule is a testament to the hard work and collaborative attitude of everyone involved in the project, whether from DIO, VolkerFitzpatrick, RAF Lossiemouth or one of the subcontractors. The runway resurfacing and associated works, such as installing new drainage and airfield lighting, will see the runway life extended by up to 25 years. I’d also like to thank the local community for their support which is much appreciated by us all.

It is fantastic to see the works completed so quickly and a pleasure to see the RAF using much improved airfield facilities in support of defence.

The completion of the runway work here at RAF Lossiemouth represents the first major upgrade to be delivered by the Development Programme and to have such a complex project delivered some three months early in the challenging context of 2020 cannot be under-estimated. My congratulations must go to both DIO and VolkerFitzpatrick in achieving this milestone.

For the wider Programme though, this is just the start. We already have one major project in delivery and expect to start another five projects in the first half of 2021. While we have secured the Station’s operational output through the new operating surfaces, we now turn more towards the people-focussed improvements where we are going to upgrade both working and living accommodation across the unit. The exciting times continue!

It’s been a privilege to see our newly resurfaced runway so busy since its early completion.

We’ve already conducted joint training with F-35B Lightning aircraft from 207 Squadron and been joined by a large US Navy detachment. That is of course in addition to our usual 24/7 Typhoon and Poseidon operations. Lossiemouth now really is a next-generation maritime patrol and fighter station!

My thanks go to my team, and contractors VolkerFitzpatrick for their hard work in successfully delivering the main runway ahead of schedule.

Completing the works ahead of schedule has been a collaborative effort and is testament to the ongoing commitment of our teams to ensure that key projects can continue throughout this pandemic. We are looking forward to the next project at RAF Lossiemouth.

As a defence critical project, upgrade work at RAF Lossiemouth has continued despite the difficulties presented by coronavirus, with various safety measures taken to make the site COVID secure.