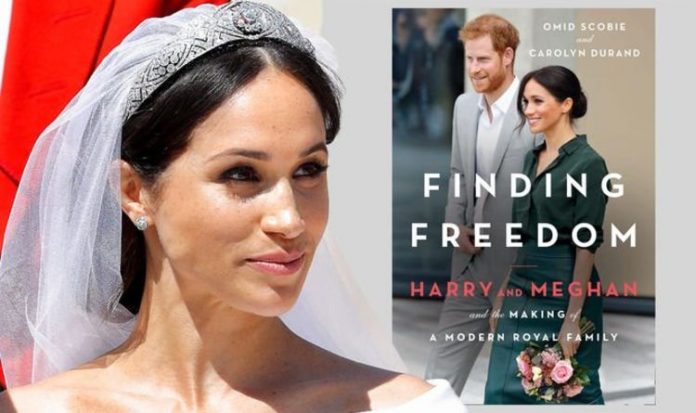 It tells exactly how Meghan and Harry were taken to the chamber where Meghan was to select which tiara to borrow for her wedding day.

One passage says: “The couple… arrived at the reception room in Buckingham Palace, where they were then escorted down a secure elevator, 40 feet below the palace, to the large vault where five tiaras had been assembled ahead of the couple’s appointment in February 2018.”

Giving the dimensions of the vault and how each item of jewellery is stored, the chapter says: “Each tiara is stored in its own safety box within the vault, a basement room about 150 feet long that is split into sections.

“The large space – its size, proof of the extent of Her Majesty’s collection of hundreds of tiaras, brooches and necklaces, earrings and other jewels – is not sparse or cold, like a bank’s vault.

The biography by Omid Scobie and Carolyn Durand is widely believed to have been sanctioned by the Duke and Duchess of Sussex. The couple have denied co-operating.

But the sheer depth of detail has led furious courtiers to conclude that only Harry and Meghan could have leaked such important security secrets.

The authors, who have received unprecedented co-operation from sources close to Meghan and Harry, reveal the larger items of jewellery are broken up, with their parts stored in separate pouches by Crown Jeweller Mark Appleby.

They tell how Angela Kelly, the Queen’s senior dresser and jewellery curator, laid out tiaras and their matching earrings, bracelets and necklaces on pink fabric-lined trays, each with a lace trimmed cover.

One courtier said: “The only three people in the room were Angela Kelly and the Duke and Duchess of Sussex.

“There are people who’ve worked in the palace for decades who wouldn’t have a clue about this vault. Now, it seems, everyone knows.”

Society magazine Town and Country plastered details of the security gaffe on its website within hours of the biography’s publication – and the social media world picked up on it instantly.

Many courtiers believe the revelation was a deliberate move to hit back at Ms Kelly, 62.

She is reported to have clashed with Harry and Meghan when they thought the aide was snubbing them.

But one courtier said: “The Queen’s relationship with Angela Kelly is incredibly strong. Revelations like this won’t harm the strength of that bond.”

Since 2002 Ms Kelly has been officially known as Personal Assistant, Adviser and Curator to Her Majesty The Queen. Her role includes planning the monarch’s outfits for royal visits.

Ms Kelly’s dressmaking achievements include making a replica of the royal gown commissioned by Queen Victoria for the christening of her first child Victoria, the Princess Royal, after the original was retired in 2004.

She also redesigned and fitted the Queen’s 1960s Norman Hartnell dress for Princess Beatrice to wear at her wedding in July.