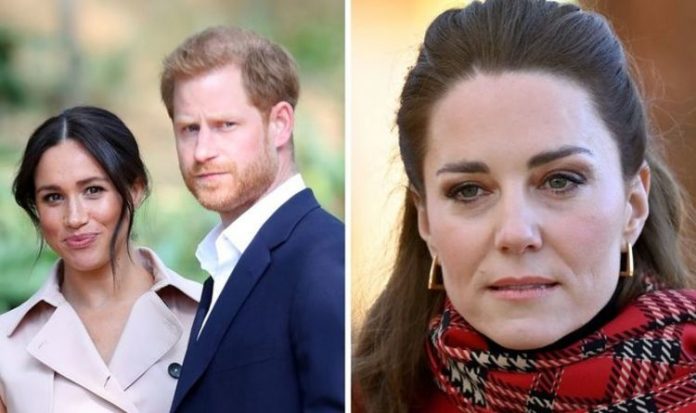 The Duke and Duchess of Sussex surprised their fans by releasing a festive podcast to round off 2020, welcoming a host of special guests including Sir Elton John, Tyler Perry and James Corden. And listeners of Archewell Audio were stunned when their son Archie delivered his first public words, wishing everyone a Happy New Year. The inclusion of Archie, just 18 months old, appears to show the Sussexes trying to outdo their sister-in-law Kate, Duchess of Cambridge, who herself made Royal Family history this year by becoming the first member of the monarchy to appear on a podcast.

She joined Giovanna Fletcher, this year’s I’m A Celebrity Get Me Out of Here! winner, on the Happy Mum, Happy Baby broadcast, which saw the future Queen consort detailing the challenges experienced during motherhood.

Her moving reflections and open honesty, earned her acclaim, as previously it was rare for such a high-standing figure within the Royal Family to speak in such detail.

But months later, Meghan and Harry announced they had gone one step further than Kate, and signed a reported £30million ($40million) deal to create podcasts for Spotify.

In the first episode, the couple went another step further than Kate dared to by including their child in the broadcast.

The couple’s Spotify deal came amid reports of a row between the Sussexes and Cambridges, with the former opting to quit senior royal life this year to lead a financially independent life, while aiming to keep Archie out of the spotlight.

Reports suggest that Harry and William fell out after the Duke of Cambridge was critical of Meghan, with the Duke of Sussex claiming he spoke “snobbishly” about his then-girlfriend at some point between 2016 and 2017.

Tensions came to a head last year, after Harry spoke about how he and his brother were “on different paths” during an emotional tour of South Africa.

Archie’s appearance drew criticism and praise, with some arguing that the Sussexes had employed “double standards” by letting their young son speak on the show.

JUST IN: Meghan and Harry ‘mirror Kate and William’ after Archie debut

Meghan Markle and Kate Middleton at the Commonwealth service in 2019 (Image: GETTY)

Many Harry and Meghan supporters have been critical of the Cambridges, alleging they would use their children for PR purposes, including earlier this year when Kensington Palace released a video of Prince George, Princess Charlotte and Prince Louis all speaking on camera to naturalist Sir David Attenborough.

One Sussex critic wrote: “So interesting, though, because Meghan Markle fans always say that the Cambridges use their kids for PR. But putting Archie on a podcast is ok?”

Karleigh Smith, who described herself as a Hollywood news and entertainment editor, also claimed that the podcast showed the major differences between the Cambridges and Sussexes.

Meghan and Kate were often seen together in 2018 (Image: GETTY)

She said that after listening to the podcast, “it finally dawned on me” why the Sussexes were “getting it so wrong compared to Kate and William” during a difficult 2020.

The commentator wrote: “The Cambridges speak TO people, whether it’s playing bingo with oldies on Zoom or visiting frontline workers during a train journey through the heart of the UK.

“The Sussexes speak AT people through CNN, Time, or via their celebrity friends on Spotify, lecturing the suffering public from their house on the hill and offering ‘cheers’ and platitudes.”

A third added: “For two people who wanted privacy, I find it strange if they are now parading Archie too.

“Perhaps their idea of privacy is different from mine!”

Despite the negativity, others praised the couple for trying to offer “hope” in a year that has seen the world ravaged by coronavirus.

One Meghan fan concluded: “William and Kate are senior royals that’s literally their job… which they aren’t quite good at meanwhile Meghan and Harry who are non-working royals do it because they care.”

Royal Family fans have been unable to see Archie as he has not been in the UK since November 2019, when he left to go to Canada with his parents.

While Harry and Meghan returned to the UK to hash out their exit from the Firm, the child stayed in North America with friends of the couple.

It is hoped the trio could be back next year to mark Prince Philip’s 100th birthday on June 10.