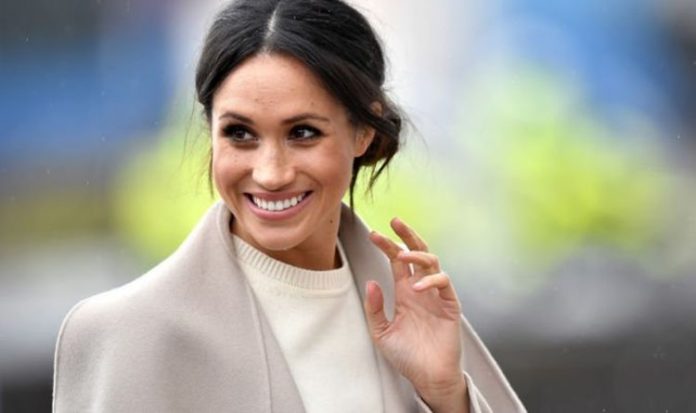 A black and white portrait by photographer Matt Sayles was released marking the first professional photoshoot for the couple since they stepped away from the Royal Family.

But it was the watch she was wearing which has caught the attention of the public.

The watch is reportedly an heirloom belonging to Harry’s late mother and Meghan has always “coveted” the Cartier watch.

She previously told Hello! Magazine how she splurged out when Suits was renewed for a third season and had it engraved.

The special watch will, she said, be given to her daughter one day.

Back in 2015, she said: “I’ve always coveted the Cartier French Tank watch.

“When I found out Suits had been picked up for our third season – which, at the time, felt like such a milestone – I totally splurged and bought the two-tone version.

“I had it engraved on the back, ‘To M.M from M.M’ and I plan to give it to my daughter one day.

“That’s what makes pieces special, the connection you have to them.”

READ MORE: Meghan Markle and Prince Harry being ‘left behind’ by other Royals

Since stepping away, the couple have been living in Los Angeles with their son Archie.

They were first staying at Tyler Perry’s $18million house in Beverly Hills before moving to a mansion in Montecito.

The couple have been outspoken on important issues such as Black Lives Matter.

This month alone, Meghan has made six digital appearances and both urge US voters to make sure they cast their vote in November’s election.

Last month, the couple signed a multi-million dollar deal with the streaming giant as they move to become financially independent from the Royal Family.

The deal is understood to be worth up to £75million over five years.

The Duke and Duchess of Sussex released a statement regarding their Netflix deal, which read: “Through our work with diverse communities and their environments to shining a light on people and causes around the world, our focus will be on creating content that informs but also gives hope.”

READ  The restriction is unprecedented, but Republican officials say they were forced to limit attendance due to social distancing restrictions in North Carolina (Reports)

The staggering Netflix deal already allowed the couple to pay back the £2.4million which was spent on renovating Frogmore Cottage – paid for from taxpayers’ money.

Their office confirmed the money had been returned in full to the Sovereign Grant following speculation.

It is understood the pair had been relying on Harry’s father Prince Charles for funds after the pair quit their senior royal roles.