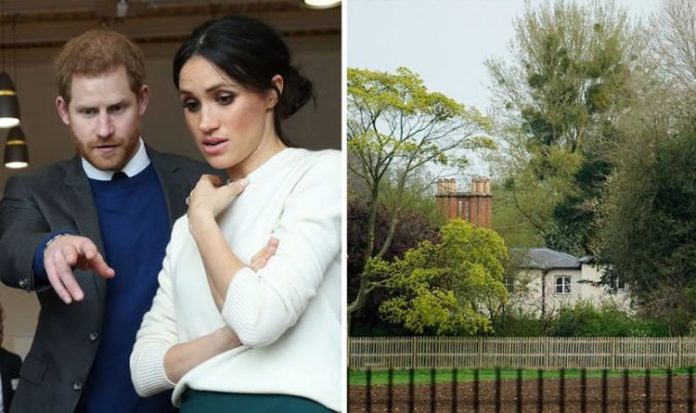 The Duke and Duchess of Sussex moved to California after stepping down as senior royals at the end of March. They have bought an £11.4million mansion in Montecito, where they live with their son Archie Harrison Mountbatten-Windsor. It has now emerged that they have shipped all their furniture over to the US and that Harry’s cousin Eugenie and her husband Jack Brooksbank have moved in.

Eugenie and Jack tied the knot in 2018, just five months after Meghan and Harry.

In September, the couple revealed the happy news that they are expecting a baby in the new year.

It is therefore perfect timing for them to be moving into a house, which was renovated with a new baby in mind, although that baby was originally Archie.

According to a recent book about the Sussexes called ‘Finding Freedom’, Frogmore Cottage has a “special place” in their hearts, but it also caused some logistic issues for the couple in their various initiatives.

READ MORE: Eugenie’s baby to enjoy gardens Meghan was ‘excited about for Archie’

Eugenie and Jack got married in October 2018 (Image: GETTY)

A royal source told authors Omid Scobie and Carolyn Durand: “They’re going to be away from their Buckingham Palace office.

“They’re both really hands-on in their work, so that’s difficult.”

Due to this, they had also planned to retain a London base in the future.

There was plenty of precedent for the Sussexes to maintain two residences.

For example, Prince William and Kate, Duchess of Cambridge, were gifted Anmer Hall on the Sandringham Estate in Norfolk by the Queen, but their primary residence is Apartment 1A at Kensington Palace.

Meanwhile, Prince Charles and Camilla have Clarence House in London as their official residence but spend weekends at Highgrove in Gloucestershire.

Prince Andrew also has an apartment in Buckingham Palace, but usually lives at The Royal Lodge in Windsor.

Meghan and Harry have moved to Montecito, California with their son Archie (Image: GETTY)

However, Frogmore Cottage was where Meghan and Harry felt they finally had privacy and safety.

For one thing, it is within the Windsor estate security zone and the couple’s royal protection officers lived next door to their home in a separate building.

What’s more, mature trees were planted around the house to keep out prying eyes and camera lenses and hi-tech laser fencing kept trespassers at bay.

They had lots of fond memories from there too, because when they were falling in love, they were able to enjoy long walks on the private grounds of Frogmore House.

Later, it was the site of their engagement photos and wedding reception.

Now, Princess Eugenie, Jack and their baby will get to enjoy all these features.

They will also get to enjoy the private gardens, which Meghan and Harry had felt would be fantastic for a young child.

A trusted confidante of Meghan told the Finding Freedom authors: “As a place to raise a child, it’s really lovely.

“They could open their door and have all those private gardens.

“Both [Meghan and Harry] felt it would be a really positive thing for their child to go there, go on walks privately.

“While it wasn’t something they had considered before, once it became an option, they were both really excited about it.”

Finding Freedom was written by Omid Scobie and Carolyn Durand and published by HQ in 2020. It is available here.