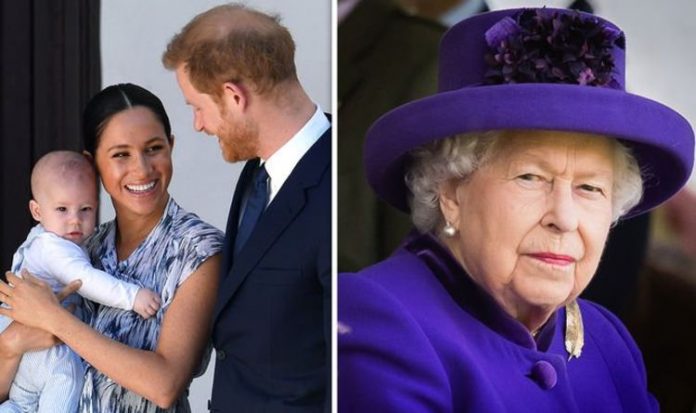 Meghan Markle, 39, and Prince Harry’s desire to do things differently became clear soon after their royal wedding. However, the modernising royal couple’s wish to break with what they felt were outdated customs seemed to solidify further following the birth of their son Archie Harrison on May 6, 2019.

Meghan and Harry dodged the traditional photocall on the hospital steps and waited two days before giving Archie his public debut.

They also kept their son’s name secret until they had introduced him to Queen Elizabeth II.

The matter of Archie’s very private christening on July 6, 2019, sparked public backlash at the time as the Sussexes’ bid to keep the milestone event under wraps coincided with the revelation they had spent £2.4 million taxpayers money on renovating their Frogmore Cottage home.

While it is not unusual for royal christenings to be private, Harry’s brother Prince William had allowed the public limited access to all three of his children’s special days.

READ MORE: Meghan and Harry spark frenzy as Duke and Duchess open up on Archie

Crowds were able to watch the Cambridge babies arrive at the church with their parents ahead of the christening.

Meghan and Harry’s decision to have Archie’s christening in the private chapel at Windsor Castle did not set a new royal precedent – Sophie, Countess of Wessex and Prince Edward’s children had been baptised in the same spot years before.

However, the Sussexes decision to keep the identity of Archie’s godparents secret was a royal first.

In his new book, Battle of Brothers: William, Harry and the Inside Story of a Family in Tumult, royal biographer and historian Robert Lacey touched on why this decision may have put the Queen in a difficult decision.

The Buckingham Palace statement announcement about Archie’s christening read: “Archie Harrison Mountbatten-Windsor will be christened in a small private ceremony by the Archbishop of Canterbury in the Private Chapel at Windsor Castle on Saturday, July 6.

“The Duke and Duchess of Sussex look forward to sharing some images taken on the day by photographer Chris Allerton.

“The [names of the] godparents, in keeping with their wishes will remain private.”

Commenting on the unusual move, Mr Lacey writes: “Confirming the palace announcement, the Sussex Royal office made clear that the whole ‘sponsor’ issue was non-negotiable.

“The godparents’ names would not be revealed.

“And I’ve never come across such secrecy.”

Meghan Markle and Harry relocated to the USA with Archie in March.

The Sussex family now live in the way-to-do Californian neighbourhood of Montecito, Santa Barbara and are expected to remain there for the foreseeable future.

While Archie will be raised as a private citizen he will automatically become a prince upon his grandfather Prince Charles’s ascension to the throne.