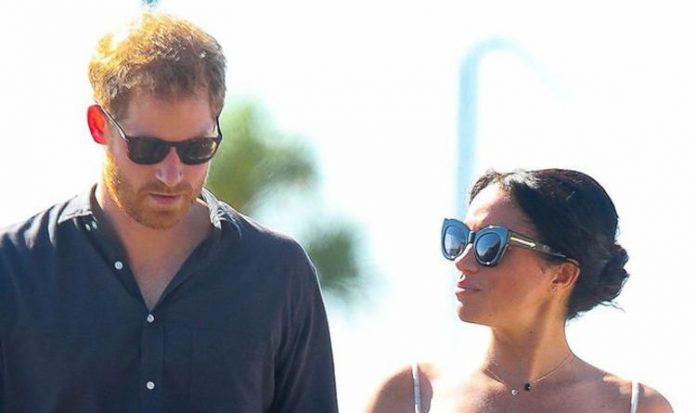 Meghan and Harry have enjoyed more and more freedom from the Royal Family and its pressures after Megxit. Yesterday the Duke and Duchess of Sussex announced Prince Harry had repaid in full the £2.4million spent in renovation works at Frogmore Cottage, their first home as a family-of-three.

However, royal fans believe the pair will never be entirely free from scrutiny unless they forego their royal titles for good.

Twitter user UK Royal Tea wrote on Twitter in the wake of the palace’s announcement: “Objectively paying back Frogmore and no longer getting $ from Prince Charles will give the Sussexes freedom to make even bigger moves with less scrutiny – but not completely as they still have their titles and are still leveraging their royal status.”

Another royal watcher with the handle Billybingbing wrote: “Repaying Frogmore and not using taxpayers money for security is great.

“They just need to drop the D&D of Sussex title, then they can crack on and do whatever they want.

“Once they are fully financially independent and not using the Royal Family name to make $$$, I don’t care what they do”.

A third Twitter user with the nickname The Royal Crown added: “Agree. If they were to forego the ‘Duke & Duchess’ altogether, I think there would be less scrutiny.”

Good Morning Britain’s presenter Piers Morgan, who has been a fierce critic of the couple, already suggested on Twitter the scrutiny won’t end with the repayment of the works carried out at the cottage in Windsor between late 2018 and early 2019.

READ MORE: Meghan Markle and Prince Harry have made it ‘impossible’ to return

He wrote: “Great news that Harry & Meghan have repaid the Frogmore Cottage costs out of their Netflix millions & will also no longer be taking Charles’s cash.

“Now, if they just give up their very commercially beneficial royal Duke & Duchess titles, they can do & say whatever they like…”

Meghan and Harry retained their full titles despite stepping down as senior royals but have agreed on relinquishing the use of their HRH styles.

The Duke and Duchess of Sussex officially stopped being full-time working royal at the end of March, a few days after they moved to California to start their post-royal life.

Despite their desire to live abroad, the couple have kept Frogmore Cottage as their base in the UK.

Meghan, Harry and Archie lived in the cottage between the late spring of 2019 and mid-November, when they left the UK for an announced six-week break in Canada.

However, upon their return in January, the pair revealed their intention to step back as senior royals and never returned to live in their first family home.

Meghan and Harry had already expressed their desire to pay back to the Sovereign Grant the £2.4m spent in renovations.

It was initially said the pair would pay back this sum in 11 years with monthly installments amounting to £18,000.

But after the couple announced they bought an £11.1million mansion in Santa Barbara and they had struck a multi-million deal with Netflix, many commentators and royal watchers called for them to pay back taxpayers with more urgency.

A statement issued yesterday by the couple read: “A contribution has been made to the Sovereign Grant by the Duke of Sussex.

“This contribution as originally offered by Prince Harry has fully covered the necessary renovation costs of Frogmore Cottage, a property of Her Majesty The Queen, and will remain the UK residence of the Duke and his family.”