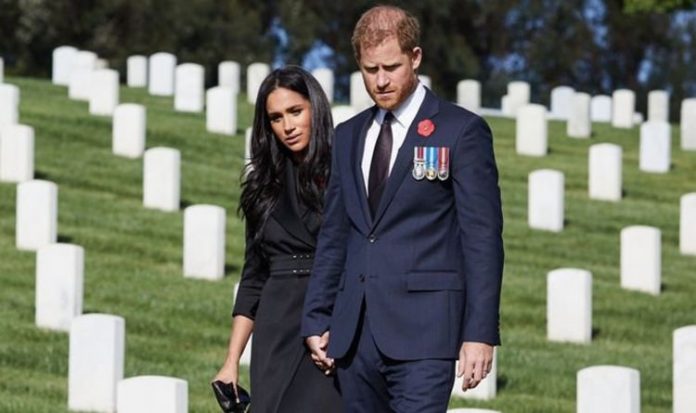 Prince Hary’s own royal biographer claimed that the photos of Harry and Meghan at the Los Angeles National Cemetery were “incredibly phony”. Speaking on The Royal Beat on True Royalty TV, Angela Levin said the photos resembled a “fashion shoot”.

The photo series shows the Duke and Duchess of Sussex laying down wreaths and looking solemn in the cemetery.

“The Duke and Duchess of Sussex wanted to ‘personally recognise’ the day in their own way.”

JUST IN: Jeremy Clarkson hits out at Prince Harry and Meghan over wreath snub

However, talkRADIO host Dan Wootton said that the photos were “tasteless and classless”.

Mr Wootton suggested that Meghan and Harry’s photos were a ploy to push the Queen off the front page of papers.

He told The Royal Beat: “Working for , all of our focus that day was on the Queen, on Kate, on Charles, on William, on Camilla.

“These pictures dropped at 8pm when all the papers are deciding what their front pages are.

“The direct result is that it pushed off, or reduced the photos of Queen and William.

She added: “It looked as if you were using the concrete tombstones as props to create an impression.”

He said: “My God, they’ve even turned Remembrance Sunday into another self-publicity stunt. Have they no shame?

“Just outrageous – treating Remembrance Sunday like a PR opportunity, & trying to steal headlines from the real royals doing their duty back home.”