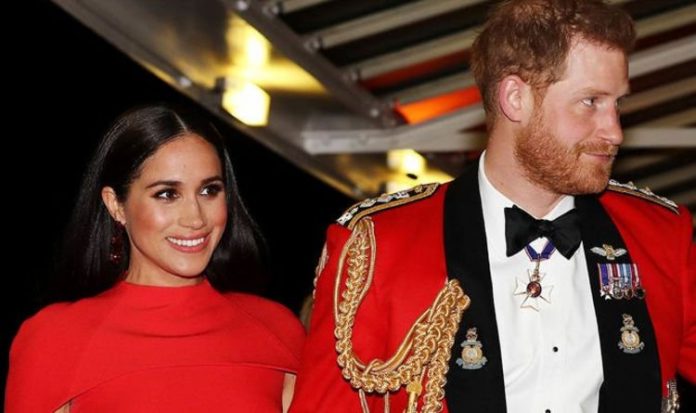 The Duke and Duchess of Sussex are “lacking that one big cause” to work on as they break free from the Royal Family, a PR expert believes. And, he added, they are filling the gap by carrying out volunteer work during which they use their popularity to shine the spotlight on charities they care about.

Andy Barr, CEO and founder of 10Yetis.co.uk, told Express.co.uk: “Harry and Meghan are caught smack bang in the middle of a tricky situation.”

The pair, he said, are temporarily in limbo as they are still linked to the Royal Family and haven’t “yet crossed over” the line which would see acquire full celebrity status.

He continued: “This is why they are executing PR101 savvy tactics such as Random Acts of Kindness.”

Since the coronavirus pandemic has delayed the launch of their foundation, Archewell, the couple appear to have focused their attention on several different issues.

In May, after the death of George Floyd, Meghan and Harry turned their attention to causes related to racial equality and justice.

A source revealed the couple were meeting community leaders and activists involved in the Black Lives Matter movement and working towards making public some of the work they were doing behind the scenes.

A source told Vanity Fair at the time: “The conversations they are having are private, but they plan to make public some of their ongoing discussions and the work they have been doing behind the scenes.

“At the moment it’s a learning exercise so that they can work out how to help.

In July, Harry and Meghan publicly raised the issues of Britain’s colonialist past during a conversation with young leaders as president and vice president of the Queen’s Commonwealth Trust.

But the Duchess has also taken part in a campaign to push people eligible to vote at the upcoming US election to register and head to the polling station on November 3.

Meghan spoke at two virtual summits about the importance of casting the ballot and clearly signalled she will do it herself as a US citizen living in California.

Meghan and Harry, who can no longer carry out royal duties but have retained their patronages, have also cast a light on US charities.

In late August, they were photographed handing out nappies, books and other necessities for children to families in need at a charity event

The Sussexes provided the press with pictures and information regarding the charity, the event and even the brand of face-covering Meghan had chosen to wear on the day.

On August 31, the Duke and Duchess of Sussex also visited the Preschool Learning Centre in Los Angeles.

Meghan and Harry played nursery rhymes in the garden and read books to the children about gardening, vegetables and planting during the visit.

They also remembered Princess Diana by planting seeds of her favourite flowers, Forget-Me-Not.